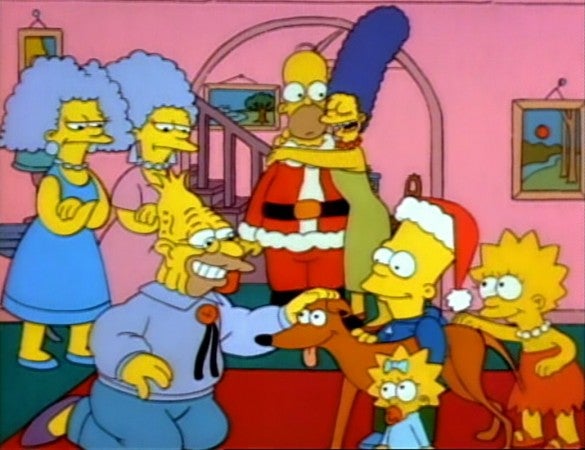 Obviously, a massively-successful TV series and merchandising machine like The Simpsons is run somewhat by committee, with no one person having the final say over every element of the production. But aside from creator Matt Groening, if there is one person who can exert a great deal of control, it's probably longtime executive producer and showrunner Al Jean.

So...how would Jean end the series, if he had total creative control and had to do it tomorrow?

Here's what he told CNN:

Well, the first thing I should say is I think we're the highest-rated show on the network, so it's not like there's an ending coming soon. [laughs]

However, there is an ending I've always had in mind, which was, I thought it would be cool if in the last episode they're getting ready to go to a Christmas pageant, and they go to the Christmas pageant that opens up the first episode, "Simpsons Roasting on an Open Fire," so the entire series is a loop with no end.

That would be my way of concluding the run, but nobody has asked me for it yet.

If this sounds kind of familiar, it's becuase (while dozens of news outlets have picked it up again) this isn't the first time he's said as much. Back in August, he made a handful of headlines when he tweeted pretty much exactly this idea...but limited to 140 characters:

While The Simpsons does remain one of the best-rated shows on Fox year in and year out, it's also expensive to make, and every time the cast's contracts expire and come up for renegotiation, there's a cancellation scare. there have been conflicting stories as to how committed the network is to keeping the show on the air, and occasionally reports that one or more cast members were ready to move on. That Jean has a simple, low-key ending planned is probably reflective of the fact that this particular plot point could be affixed to the end of any given episode if the need to write a finale were to suddenly arise.

That he's got the same one for months at a time? Whether that means anything can be up to you.

Report: WWE Has Potentially Picked Up a Top Independent Prospect