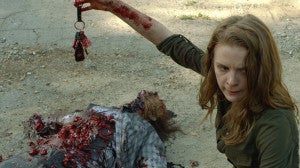 October 1 will see the launch of a new series of webisodes set in the world of AMC's The Walking Dead.

While the webisodes typically focus on characters not featured in the series itself, this will be the first time AMC introduces new characters since the announcement that The Walking Dead will get a "companion series" in 2015, so it's likely that the next few years of webisodes will be especially scrutinized for a sense of what the world feels like without Rick and Carl Grimes in it.

In the three webisodes (7 to 10 minutes each), the lone survivors of a massive walker-attack, Paul (played by Cowboys and Aliens's Wyatt Russell) and Karina (Ashley Bell, The Last Exorcism), speed across the countryside, frantically searching for an aid-station, as one of them slowly bleeds out from a wound.  Finally coming upon a hospital that has not been overrun, at first feels like a blessing, but could soon turn to misfortune, as a seemingly benevolent doctor (Ellen Greene, Little Shop of Horrors) may hide a darker agenda.

"The webisodes give us a unique opportunity to see other parts of the ravaged world of The Walking Dead while weaving in and out of our show," said Nicotero. "The crossover between ‘The Oath’ and The Walking Dead ties in one of the most iconic images from the series, and gives us insights and history to yet another timeline.  I had worked with Ashley on The Last Exorcism and brought in Wyatt and Ellen, who rounded out the brilliant cast perfectly."

Previous webisodes told the story of "The Bicycle Girl," so it wouldn't be surprising if the "iconic image" in question turns out to be a memorable walker from the show.