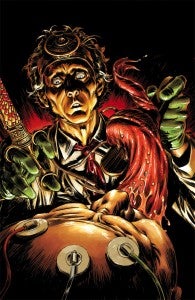 Brandon Seifert started his career in mainstream American comics in a pretty auspicious way: teaming with Lukas Ketner, an up-and-coming artist who has worked with Dark Horse, Image Comics and the Comic Book Legal Defense Fund, the pair formed the creative core of Witch Doctor, the first new title launched by Robert Kirkman's fledgling Skybound imprint (which currently also publishes Kirkman-penned hits like The Walking Dead, Thief of Thieves and Invincible, and will kick off Clone soon). The series was a massive success, both in terms of sales and critical acclaim, winning the pair an opportunity to continue Dr. Vincent Morrow's adventures in supernatural medicine in next month's Witch Doctor: Mal Practice. At the New York Comic Con earlier this month, Seifert joined us to discuss the series, his career and what's next for Morrow's mad medical misadventures. Alright--for the uninitiated, what's your hundred-word pitch for this series? Witch Doctor is a horror medical drama. It's sort of like if Dr. House fought supernatural diseases, like vampirism, demonic possession, zombism, stuff like that. A strange quirk of horror fiction is that a lot of the monsters in it are basically disease metaphors so putting a doctor up against them kind of makes a lot of sense. The book was the launch title for Robert Kirkman's Skybound imprint and we've got a second miniseries coming out in November. Is this one of those things that's in the vein of Hellboy, in terms of being an undending series of miniseries? Yeah--Hellboy was really inspirational. I don't know if we're going to continue in that kind of publishing format, but that was our original idea was that we'd do miniseries and one-shots and stuff. At this point, it makes more financial sense to turn it into an ongoing monthly book but there's a lot of kinks that would have to get ironed out before that would be possible. The intention is there, and the ability is there to just keep telling stories with it kind of indefinitely. The central conceit of the series is, it's taking classic horror monsters and combining them with the worst things from real-life biology and medicine. There's just a hugely fertile--we can take any monster, and any monster can be the inspiration for a story...and any disease can be the inspiration for a story. 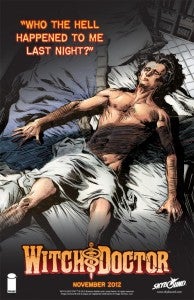 So basically, what you're doing is sitting around watching old Universal movies and reading the DSM. Yeah, pretty much. Or reading summaries of the DSM on Wikipedia. Because that's never wrong--or rather the fun thing is that what is wrong can just be incorporated into the monsters. Yeah, it's a pretty good working process so far. How did you come together with Lukas? I've known his work on previous stuff, but the first time I remember seeing your name is on Witch Doctor. It just looks like one of those partnerships where you guys have known each other forever. Well, I appreciate that, but that's not actually the case. Witch Doctor was the first thing I worked on, and I met Lukas socially in Portland. We're both from Alaska, but we didn't know each other socially until we moved to Portland. I met him there and we determined that we both wanted to do comics, but didn't have any kind of portfolio for it. So we decided that we were going to team up and do a short portfolio piece to try and get other work in comics. And the idea we ended up coming up with was Witch Doctor--and we realized we had to take that idea and run with it, because there was so much potential there. How does one get into comics in Alaska? I know firsthand that there aren't a lot of retail stores there. Lukas is from Anchorage, and they've got a chain comics store in that area called Bosco's. I know Lukas got into comics by going to the Loussac Library in Anchorage, which is the public library there, and they actually have a really good graphic novels section, so he just started checking out random graphic novels. For me, I lived in Fairbanks and Fairbanks has weirdly, an amazingly good comic store, The Comic Shop. It's a far better comic store than the town deserves, because people don't really buy comics up there. But the store is great--people like Scott McCloud and David Petersen have gone up to Fairbanks and gone to that store and gone, "Why is this store here? This is such a good comic store! People don't know how good they've got it here." So for me, I had this amazing comic store that I kind of grew up in. On any comic, the general rule of thumb is that the artist takes longer to draw the book than the writer takes to write it. Have you got other stuff coming up besides Witch Doctor? Yeah, I've got a bunch of stuff, actually--I've got a four-issue Hellraiser miniseries called Hellraiser: The Road Below. It comes out right around Halloween. I'm doing two issues of the Dr. Who series for IDW, that's issues #3 and 4, and it's supposed to start in November but it may be pushed back to December, we'll see. I've got a few things I can't talk about and a new, creator-owned comic called Spirit of the Law that I'm doing with a guy named Michael Montenat--and that's digital-exclusive, noir-pulp mash-up comic that's getting released by Monkeybrain Comics. Is there anything I missed? What we should mention is Witch Doctor: Mal Practice is coming out November 28. Hellraiser #1 is coming out on November 7, Spirit of the Law #1 is coming October 31, with issue 2 coming two weeks after that. I also like to point out that issue #0 of Witch Doctor is free on ComiXology, if you want to check that out.

The Witch Doctor Is In: Brandon Seifert on the Skybound Series's Second Volume