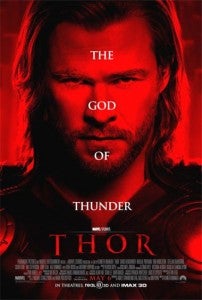 What will the Thor movie bank in its first weekend of release at the U.S. box office? While it should win the weekend, we don't expect it to set any new records on the comic book movie front. The Thor movie is getting very good early reviews from critics, so the buzz on the movie is definitely strong. However, Thor is going up against a very powerful Fast Five, which is in its second week of release. Often, major movies avoid going up against a new big budget comic book release, so there is relatively little box office competition. However, Fast Five got a week headstart and outperformed expectations. Fast Five will likely perform well for a second week in a row and cut into the box office revenue take for Thor. Another thing that Thor has going against it is that he is one of the lesser known characters from the Marvel Universe among the general public. Sure, Iron Man was a lesser known character as well, but Iron Man had the star power of Robert Downey, Jr. to pull in viewers. While Thor has some star power as well in supporting roles, Chris Hemsworth, who plays the title character, doesn't have the box office recognition of Robert Downey, Jr. Our prediction is that Thor will do somewhere in the mid-sixty millions. The Thor movie box office take will be respectable but a little on the low side for a blockbuster comic book movie. However, the good news is that if the reviews stay strong, then Thor might not have the huge second week dropoff that many comic book blockbusters have. We predict the Thor movie will have a solid run and will still make plenty of money for Marvel Studios in the long run.