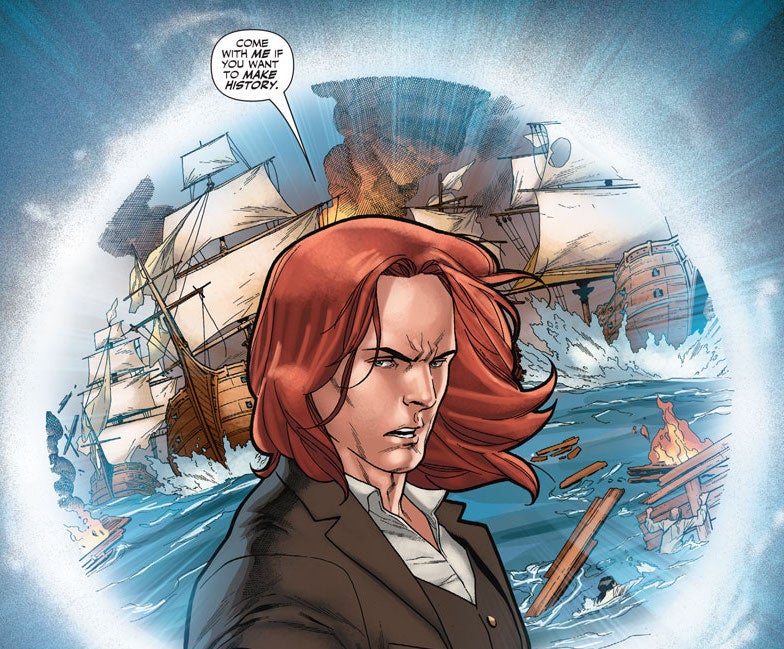 For Fred Van Lente, time is quite literally of the essence. As the scribe for Valiant's upcoming "Ivar, Timewalker" series, Van Lente will unearth all manner of temporal travel and exploration. But don't expect your typical psudeo-science fluff in these pages. Van Lente, a self-described lover of scientific research, is packing scholarly facts and theories into his monthly adventures. And with the immortal Ivar—Armstrong and Eternal Warrior's mischievous brother—steering the wheel, there will be plenty of brawn to complement the series' brains.

Below, Van Lente spared some time to, well, talk about the theory of time, working with his Archer and Armstrong collaborator Clayton Henry, and what makes Ivar—a cross between Reed Richard and John Constantine—such a "bastard." And be sure to check an 8-page preview of issue #1, and exclusive looks at the issue #2 variant covers by Brian Level and Ramon Villalobos.

To get the ball rolling, can you give us a series pitch for Time Walker, like the one you gave Valiant? What is the general premise and vision you have for the series?

For starters, Ivar is known to the time-traveling community as the Forever Walker. He's doomed to walk from time to time without ever having a time period of his own. The character is like a Reed Richards meets John Constantine; a super genius who can save the day, but is enough of a bastard to ruin everyone's lives in the process. When the series opens, he goes to Switzerland and knocks on the door of a researcher named Neela Sethi, who is about to accidentally invent time travel. And that has attracted this force that is trying to kill her. So they go on a cross-time adventure from the Big Bang to the Big Crunch, and all points in-between. It's a romance, it's a science fiction adventure, it has a lot of humor in it. Having worked on it long enough, I can almost describe it as a sexy "Hitchhiker's Guide To The Galaxy." It's the comparison that keeps popping up in my mind.

Nice. And what attracted you to Ivar? What did you see in the character that made you want to tackle him?

"Timewalker" has always been one of my favorite original Valiant titles, with the exception of the original 12-issue Barry Windsor-Smith "Archer and Armstrong" titles, which is actually where Ivar was also introduced. I liked the series from the beginning, and I'm also attracted to the super-smart characters who are kind of too smart for their own good. Ivar, for folks who have read "Archer and Armstrong," was introduced literally in the first page of issue #1 as the person to bring about the great cataclysm that destroyed the world before this one. So, he has a lot of baggage to him. I also like characters who have a lot of guilt, and are looking for redemption.

It's definitely a clean break from the previous series, even though Ivar was introduced in Archer & Armstrong." I you go back and look at Archer and Armstrong, you'll see foreshadowings to the current series. In fact, so much that I blew Dinesh's mind when I showed him the issue of Archer and Armstrong foreshadowing some of the beats that this series will cover. I've been thinking about this for a long time. But you don't need to read Archer and Armstrong before this. It's a very different book. That book emphasized the comedy while Timewalker emphasizes the adventures and romance.

And how closely would you compare your Ivar to the classic Valiant Universe's? What are you taking a leaving from his classic intepretation?

I guess the main difference is that my Ivar is more of a bastard. Ivar is very heroic in the first series, but my guy is—well, the point of view of Timewalker is through Neela, so for the first and second issue the reader is sort of figuring this character out with her. He lies a a lot. He's always going to do what he thinks is right. You just have to trust him because he knows what he's doing, and there's always going to be a good outcome. Whether that outcome is good for you as opposed to the rest of the universe is another story though. think a good comparison would be that this version of Ivar compared to the original Valiant Universe would be like how we update comic characters for TV and film. You plunder the old stuff but then you twist it and shape in such a way that it works better not just for modern times but for the story you're working with. So there are several things that are inspired by or directly taken from the original Valiant Timewalker series that I hope people will see and appreciate. But there' nothing that will make readers scratch their heads.

I was wondering if you would talk a bit about his companion, Dr. Neela Sefti. Obviously there's only so much you can divulge right now, but what makes her a good companion for Ivar, and what do you think readers will get out of their relationship and interactions?

Her background and personal history are a major part of the first storyline, so I can't say too much about that. She's Hindi-American, she's from Long Island, she had to take over as the head of her household after her father died. She's ben on this very specific career path for years, and there's going to be a whole new world of adventures and travel opened up to her by Ivar. She's very excitable, but the best thing about her is that she's Ivar's opposite. Like all the classic buddy adventures, there are opposites. Ivar plays things very close to the chest, and is very calm and collected. Neela is very excitable and curses a lot. I actually based her on a specific comics colleague of mine whom I work with a lot. I hear her in my head when I'm writing Neela. But I should probably tell her that myself before I reveal it here (laughs).

Haha, that's fair. And what time eras are you most excited to explore as Ivar and Neela jump from century to century? Is there one sandbox that you're particularly excited to play in?

I love all of them. I'm such a research junkie, I just kind of get off on all of it. I'm exploring an ancient african city from the 10th century that I'm really loving. I love all the different prehistoric eras, the Precambrian battles. The Battle of Gibraltar is probably my favorite single action sequence that I've ever done in a comic. Clayton's almost done drawing it, and it's very cool. There's historical figures, and there's Neela and Ivar, and there's other Valiant characters there. There's explosion, there's robots, there's time-portal openings. This is all in an 8-page sequence.

Speaking of Clayton, how is it to collaborate again? Are you excited to be have him back in the saddle?

Well, you're assuming that I can put a saddle on Clayton. I try to give him a ride, but he kicks me in the nuts and runs away (laughs). But no, it's great. I love working with Clayton. We see eye-to eye on most things. He has no problem calling me at any time to ask me questions about what I'm doing, which is fine. The thing I praise so much about Clayton is that he's one of these innate storytellers who understands not just the panel-to-panel shots in the storytelling of comics, but almost more importantly, he gets how to display the interactions between characters. He just gets the scenes. Even some of the most talented artists that I've worked with do weird stuff in their body language. One of the most common things that drives me crazy is when a character's backside is to the camera in important shots. And that's not just something you can correct in the comics process. You want to know what this person is thinking through their face. But Clayton nails it every time. I think part of the reason I push Neela's expressiveness is because Clayton can pull it off and make her a super fun character.

Cool. So as a fun exercise, could share a context-free line of dialogue that's your absolute favorite from issue #1?

That's a great question, and difficult for this comic, because there are a lot of them that I'm super-fond of. However, at one point Neela yells to Ivar, "You seem to have failed to understand the basic concept of fleeing."

Cool. Since this book is all about time travel, let's do a bit of our own. If we were travel forward a year from now, what do you hope have achieved with Timewalker? Where would you like it to be amongst the Valiant Universe and with comics readers?

Oh, well you always want your book to sell well and to be loved by everybody. I would love it to be the #1 book (laughs). It might be a stretch to ask for millions of copies sold, with our current market, but I'd love to have thousands. Ok, maybe hundreds (laughs).

Ha, that's fair. Is there anything else you wanted to mention about the series?

I'll point out is that I've been reading a ton of Stephen Hawking, who's written a surprising amount on time-travel. So rather than in things like Looper, where there's one kind of time travel in the story, Timewalker will have like 1,700 different types of time travel in the series. Several of which, I guarantee most people will not have even heard of before. I'm super excited for people to see that.

Awesome. Is there one type of time travel that you're most excited to play with?
Yes! Let's see…if you go on Google, Hawking has a great essay on cosmic string technology. I know it sounds like something Jack Kirby made up, but it is in fact something I got from Stephen Hawking. So a cosmic string-powered time machine will be in the book. It's all there on Stephen Hawking's website, if you anyone wants to read it. It's very readable.