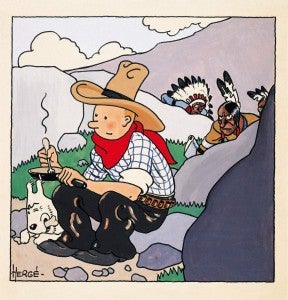 This weekend, a cover to 1932's Tintin in America by famed Belgian artist Herge (and, yes, the basis for the Tintinfranchise of films by Steven Spielberg and Peter Jackson) sold for $1.6 million dollars ($1.3 million Euro) Paris auction house Artcurial Saturday, setting a new record for original comic book art, according to The Hollywood Reporter.

In doing so, the piece broke its own record, set in 2008 when the current seller bought it for $973,000. For those keeping score at home, that's more than a half-million dollar appreciation in just four years. Only five such covers are known to exist, including two which are in the hands of private collectors, according to THR. The buyer at Artcurial Saturday was anonymous, and cloaked in an additional level of anonymity because he represented by a friend.

The auction was all about Tintin, with a copy of Explorers on the Moon selling for $42,000; the edition was  signed by Herge as well as astronauts Neil Armstrong, Buzz Aldrin, and Michael Collins. Some original sketches from another of Herge's work, flight 714 to Sydney, sold for over $100,000.

Tintin in America collects strips originally published in newspapers, and is the third of the 24 official Tintin volumes. The series has also inspired dozens of animated specials and films, some of which have been collected into non-canonical comics of their own.

The American record for the costliest original art was set just last year, when a splash page from The Dark Knight Returns sold for just under half a million dollars. The piece was recently reproduced by Miller as a fan commission for an undisclosed sum, and recently sold more pages from the book at auction as well.