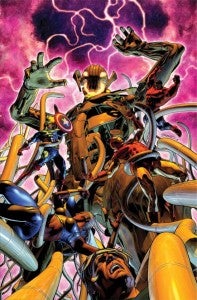 Todd McFarlane has broken his silence on Neil Gaiman's move to bring Angela to the Marvel Comics Universe and, in doing so, revealed that Gaiman owns the character free and clear. "Neil Gaiman and I had a resolution in our legal dispute, and as part of that he ended up with the rights of Angela," McFarlane told Newsarama. "Whatever Neil chooses to do with something that he owns is at his complete and utter discretion." While the details of their settlement were sealed, many industry insiders had assumed that the two co-owned the character. Some observers had noted that was unlikely, since Gaiman had tweeted that he "got Angela" during a conversation with another Image Comics co-founder. There are also no joint copyrights filed with the U.S. copyright office between Gaiman and McFarlane, according to an online database (which admittedly could have beeen out of date). McFarlane will co-write Guardians of the Galaxy #5, in which Angela will appear. There have been rumors that Marvelman, a character with a similarly-complex legal history but which is currently owned by Marvel, will be introduced via Angela. "The health of the industry is based upon having good stories and good characters, and a wide customer base," McFarlane said. "If bringing some of these characters back to the fold in a meaningful way adds to that, then it just strengthens our industry."