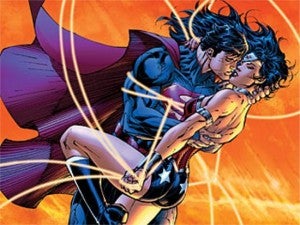 With the year 2012 over, Comicbook.com decided to take a look back at the top five comic book stories of the year. While the DC Comics relaunch tended to dominate headlines for the year 2011, this year things were a little more spread out, but DC Comics still captured their fair share of press. Here are the top five comic book stories of 2012. 5. Sandman Returning – DC Comics had two big announcements about past series returning in 2012. Because the Before Watchmen details actually leaked out in 2011, we decided to leave it off the list even though the official announcement came in 2012. However, DC Comics did manage to catch everyone by surprise with an announcement at San Diego Comic-Con that Neil Gaiman would be returning to comics to write a Sandman prequel. 4. Glenn Brutally Killed In The Walking Dead #100 – 2012 was the year of The Walking Dead in more ways than one. Not only did The Walking Dead break ratings records on AMC, but The Walking Dead comic book reached issue #100. To celebrate the milestone issue, writer Robert Kirkman killed off fan favorite character Glenn in a very brutal way. Steven Yeun, who plays Glenn on the TV series, even wrote a letter to Robert Kirkman to express his outrage. 3. Earth 2 Green Lantern Is Gay – While there have been quite a few gay characters in comics over the years, DC Comics captured headlines when they revealed an existing character would be revealed to be gay in the new DC Universe. Of course, this led press sites to speculate that it was either Superman or Batman, but the character was eventually revealed as the Earth 2 Green Lantern. 2. Superman Dating Wonder Woman – When DC Comics revealed that Lois Lane wouldn't be Superman's wife or even girlfriend in the New 52, many fans speculated what romantic possibilities might be in store for the Man of Steel. In 2012, DC Comics dropped the bombshell that Superman would start dating Wonder Woman. 1. Peter Parker Is Dead – The year ended with a bang. Not since the death of Superman has the comic book world seen such a monumental passing. Killing off Peter Parker and replacing him with none other than Doctor Octopus proved by far to be the most controversial comic book story of the year.