Big Red Soda is partnering with Transformers: Age of Extinction this summer to release a line of collector's cans. The six limited-edition cans, included in Big Red 12-packs, feature images of the newly redesigned Optimus Prime and Bumblebee. Big Red Zero will feature cans with the Autobot or Decepticon icons. 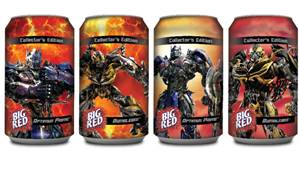 "Just as we see with Big Red enthusiasts, Transformers fans all have a passion of epic proportions for the franchise. This is our opportunity to offer everyone a chance to receive something 'Deliciously Different' in anticipation of one of the biggest films of the summer," says Thomas Oh, Big Red's SVP of marketing. "We are thrilled to be part of bringing the explosive on-screen action of TRANSFORMERS to life with not only our Limited Edition Transformers can series but also a sweepstakes offering fans the chance to win some unique Transformers prizes."

"This national Big Red campaign is a great way to ramp up further excitement for the upcoming release of the film," says LeeAnne Stables, Executive Vice President of Worldwide Marketing Partnerships for Paramount Pictures. "Now Big Red fans of the franchise can get set for the movie with Transformers: Age of Extinction collectible cans and cool movie themed prizes."

Big Red will be running $25,000 Transformers sweepstakes, including prizes such as Transformers collectable figures, Hasbro toys inspired by the movie, wearables, DVDs, posters and a cooler that transforms into a picnic table.