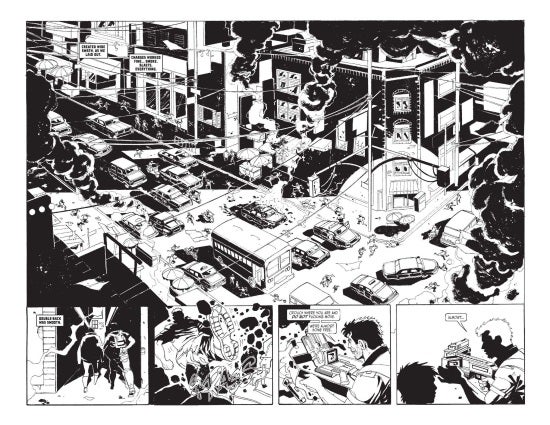 Directors Joe and Anthony Russo are having a big year. "Captain America: The Winter Soldier" is about to open nationwide and is receiving very positive reviews so far. Marvel Studios is so impressed with the film that the Russos are already in talks for "Captain America 3." Somehow, the duo have still found time for another project. "Ciudad" is a graphic novel being published at Oni Press. It's written by Joe and Anthony Russo, co-written by Ande Parks with art from Fernando Léon. Here's the official description of "Ciudad," from Oni Press:

Created by acclaimed writer Ande Parks and Joe and Anthony Russo, the directors of the upcoming Captain America: The Winter Soldier, with art by Fernando Léon, Ciudad is a brutally violent, action-packed thriller about a world-weary mercenary hired by a powerful drug lord to pull off an impossible retrieval mission in one of the world's most dangerous locales while battling warring factions, a corrupt police force, and an city full of hired killers.

"Ciudad" is scheduled for release in December 2014 and has already been optioned for a film, with Dwayne "The Rock" Johnson attached for the lead role. "Captain America: The Winter Soldier" comes to theaters April 4, 2014.