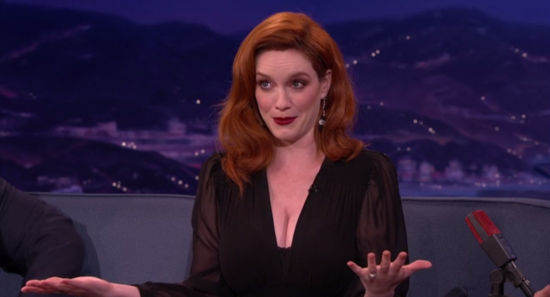 There has been a rumor circulating that Mad Men star, Christina Hendricks, is interested in joining the cast of Game of Thrones. Last night, on Conan, Hendricks cleared that rumor up, saying that she's never even seen Game of Thrones. Turns out a reporter at a red carpet event asked her what show it would be fun to appear on and Hendricks, off the top of her head, named Game of Thrones. It suddenly because a story on the Internet. Conan O'Brien mentioned how, when he's on the red carpet, he'll say ridiculous things. He told a reporter, once, that he was getting into pornography and his mother read it in the newspaper. "[She was] happy," said O'Brien, "she knows I'm very talented."