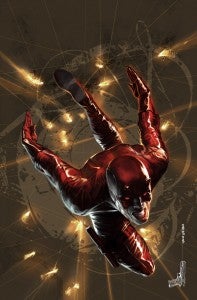 Barring a last-minute deal between the studios, the film rights to Marvel Comics' Daredevil is set to revert to the publisher's new owner, Disney, in mid-October if it isn't already in production at Fox, who have held the rights since for a number of years and who made the unpopular Ben Affleck film featuring the character in 2003. And now, according to the most recent director associated with the film, the project appears dead in the water. David Slade, who was attached to the project for a long time, bowed out in July and was seen to be in serious danger at that point, with no leading man, no director and less than three months to get off the ground. A little less than a month later, director Joe Carnahan was attached to the project, with rumors that Fox wanted an extension on the rights to make his version of the film happen and that they were willing to explore co-financing with Disney or even possibly trade the rights to some other Marvel characters they control in order to make the film happen. "[I] Think my idea for a certain retro, red-suited, Serpico-styled superhero went up in smoke today kids," Carnahan tweetedearlier today, adding, "We shall see. Time is NOT on anyone's side." Carnahan's vision for the film was reportedly a more '70s, neo-noir, Scorcese-inspired look at the Hell's Kitchen hero, as opposed to the sleek, packaged superhero film Fox did ten years ago that was reminiscent of Sam Hamm's script for the Tim Burton Batman film, if it had been shot by a director with a less artsy sensibility.

Daredevil Will Probably Revert to Disney