Melissa McBride has become the most unpredictable fan-favorite, badass character on AMC's The Walking Dead.

Her character, Carol, started out the series mousy and abused by her husband, who died early on and left her with a young daughter to take care of...

...who also died fairly early on in one of the most harrowing episodes of the series, and the one that helped Scott Gimple get his showrunner job.

The character has perseverered, though, and McBride has had Emmy talk each of the last three seasons. So...what does she have to say for herself?

Obviously, you've had a career and a reputation before this -- what's it like suddenly becoming an action hero at your age and this point in your career?

You know I think Carol and I have more in common than I just sit here and reason out -- that I'm kind of evolving with the career part/aspect personally as she is evolving in the world of the post-apocalypse. But this is new to me so I don't have a whole lot to measure it against. Her taking control seems like a very natural evolution for her, where she came from and what the world requires of her in order to survive and then me having an action figure in the real world of a part that I play, it's like, well, here it is, what do you do with it? Well, it's there so that's what it is, I don't know. It's a little surreal but I don't know any different. That's just what happens when you're on a big TV show. I don't even know what to make of it.

Obviously you're a very different character than in the comics -- and not just because your Carol is still alive.

I've read the comics up to a little bit past where the character, Carol's character dies. When I first got the part and I was reading, finding out about the character, I didn't know what they were going to do with it, if it was always going to be verbatim from the comics. I like the way it's turned out, I'm glad that they took a chance on this character and I'm happy that it went in a bit of a different direction. To whatever I owe the credit, I'm not sure.

Well, I've heard a couple of times that the producers saw something in your performance and thought it was worth exploring more.

They tell other people things that they don't tell me! I don't know why they took Carol in a different direction but I'm happy that they did. If I had anything to do with it, then I'm happy about that. 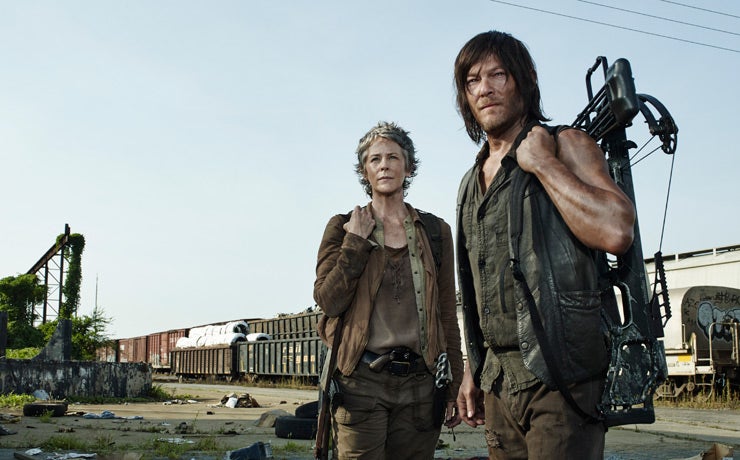 Is it odd that the Carol/Daryl relationship has taken on such a life of its own? I mean, you couldn't possibly have thought  back when you started the show that every interview would be about whether we might see you make out with Norman Reedus.

It's only odd in that nothing has ever been substantiated so a lot of it I feel like is the creation of the fans. There's obviously some kind of chemistry between those two characters and part of that is that they have a lot in common as far as where they come from and the struggles that they've each experienced and tried to overcome and continue to in that post-apocalyptic world and they support one another because they understand that in one another. It's like, let's see how many steps forward we can get and if one goes backwards, one's there to pull them forward again. Keep an eye out for each other in that way.

So it's a neat, sort of still-unspoken thing and it's lovely to me, it's very sweet. But no, this phenomenon thing, this whole shipping thing...the fans are just so incredibly passionate and it's something they want to happen, or they've seen things that...I don't know! I love it that they're engaged but no, when you think of early on and then you see today how fervent people are about these hook-ups, I never would have seen that coming either.

Much as I never would have seen Carol becoming an action hero or me having an action figure. To me, she's just Carol doing what she's got to do and I'm just an actress doing what I've got to do. Life changes, and it's adapting.

Obviously, The Walking Dead is notorious for its secrecy, even with the actors to an extent. Did you know last year when you were briefly written out that you'd make it back okay?

I did, yeah. They let me know when that script came out, they said don't worry, you haven't gotten that call, she's not gone for good, she will be coming back, I just can't say when.

That's got to change your craft quite a bit, right? Which way do you prefer?

Sometimes I look back and I say, "I wish I had known this was coming," but still in the end the immediacy of where the characters are in that world and the immediacy of where as an actor you come from each script...adapting what the writers have given you in a space of not knowing everything is kind of cool. In the same way that what that post-apocalyptic world is giving them on a daily basis, not knowing is also a great challenge and you just evolve with it and make it work.

On that note, a fair number of fans are going into the season knowing a few things because of all the set photos, including shots of you and Norman (which have now seen an official still or two released, so we can talk about it). What's your take on that?

There's two sides of me; one side kind of shrugs it off; okay, people want spoilers and they're going to go looking for them. And then of course there's social media and not everybody labels their spoilers a spoiler and you're caught off-guard and then there's a lot of people who don't want to be spoiled.

For me, I kind of like keeping Carol and what happens in the story very close to my vest, keeping those cards face down on the table.

I don't want anybody to know; I want it to come, but that's just me and that's how I enjoy watching, too.

I always go, "No, no, spoiler pictures! Where were [the photographers]? Did I see them?" Now I try to scope them out. But you don't really know.