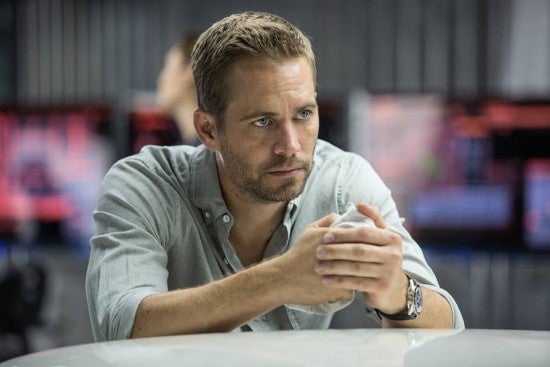 Paul Walker, star of Varsity Blues and Fast & the Furious, died tonight in a single-car accident in California, according to a TMZ report. The news and gossip site are saying it's a single-car accident, and that there was another person in the car with Walker. It's unclear who was driving, and both passengers died in a crash that apparently resulted in an explosion. The accident occurred in Santa Clarita — outside of Los Angeles — when Walker's Porsche apparently lost control and crashed, TMZ reported. "At the conclusion of the accident the vehicle struck a light standard and the whole car was burned," a Los Angeles County Fire Department spokesman said. Photos of the Porsche available at the Santa Clarita Valley Signal shows the car a twisted and unrecognizable wreck, and report that even though it was a single-car crash, a car parked nearby was taped off alongside the vehicle. UPDATE 10:25 p.m. EST: A Facebook fan page dedicated to Walker printed this statement, although Walker's verified Facebook page has yet to comment: "It is with a truly heavy heart that we must confirm that Paul Walker passed away today in a tragic car accident while attending a charity event for his organization Reach Out Worldwide. He was a passenger in a friend's car, in which both lost their lives. We appreciate your patience as we too are stunned and saddened beyond belief by this news. Thank you for keeping his family and friends in your prayers during this very difficult time. We will do our best to keep you apprised on where to send condolences. - #TeamPW" 2nd UPDATE 10:28 p.m. EST: Brian Truitt of USA Today just tweeted, "Confirmed with his reps that Paul Walker died in a car accident today. Stunned. I just talked with him last week." Numerous other media outlets have picked up the initial report but there has been no confirmation from representatives for Walker or law enforcement. Variety claims that a source close to Walker has confirmed his death. There was significant initial confusion on social media because TMZ sometimes employs freelancers without a proven track record, so many reporters were skeptical of their first report--but it took nearly half an hour for anyone else to provide a second source. Several local news reports confirmed that an accident with two fatalities occurred Saturday afternoon in Valencia, California, although the names of the deceased have not been officially released. Walker was reportedly in Valencia doing fundraising for typhoon relief. Walker was working on the in-production seventh installment of the Fast & Furious series. He will next star in Hours, a drama set in the aftermath of Hurricane Katrina, due out December 13.