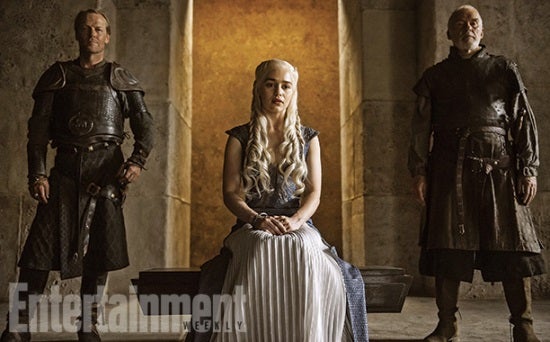 HBO has released two first look photos at Daenerys' throne room from Game of Thrones (via Entertainment Weekly). In "Oathkeeper," we see Daenerys incite a slave revolt within Meereen's walls. By the time it is over, her banner, with House Targaryen's sigil emblazoned on it, is flying from the top of Meereen's great pyramid. It is there that Dany will set up her throne room as she attempts to rule Meereen. Audiences won't see the throne room appear on the show for another two weeks, but it marks a big transition for Dany. Now, instead of roaming the continent, she will have to settle in and try to rule for the first time. In the throne room, Daenerys sits on a bench. It doesn't seem like much compared to the Iron Throne in Westeros, but when you consider the fact that the bench is located at the top of an 800-foot high pyramid and that the room around it is at least as beautifully designed as the throne room in King's Landing, it's still pretty impressive. "It was maybe the the biggest challenge [production designer] Deborah Riley faced and was probably the [set] we were most nervous about," says showrunner David Benioff of Dany's throne room. "It's really easy to go into a big sci-fi territory. It's really a testament to Deb. She designed both the audience chamber, where it's a grand room where Dany sits on her bench, and her personal quarters at top of the pyramid — they're just gorgeous. Incredibly experienced crew people were gasping." Game of Thrones airs Sunday nights on HBO. 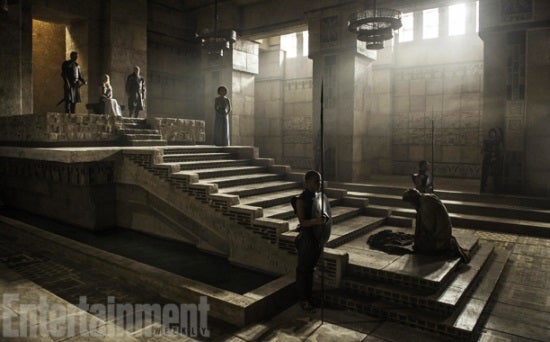