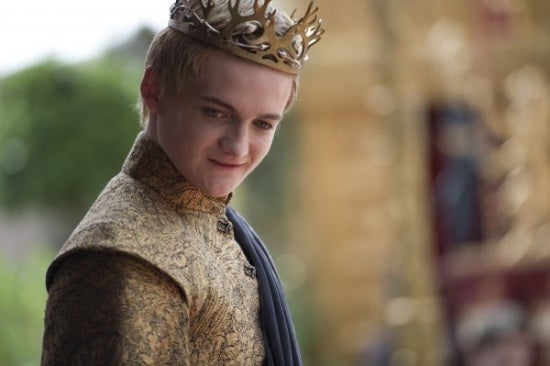 King Joffrey Baratheon is not a beloved ruler. Rather than great, most of Joffrey's notable deeds as king have been petty and vindictive. Considering what happened at the Purple Wedding in "The Lion and the Rose," we felt like now would be a good time to recount the many reasons why Joffrey is the most hated character in Game of Thrones. Had Mycah and Lady Killed In the season 1 episode "The Kingsroad," Arya Stark befriends a butcher's son named Mycah. Mycah and Arya play-swordfight and are having a good time until Joffrey wanders over. Joffrey decides he's going to put Mycah to death for pretending to be a knight. Arya's direwolf, Nymeria, senses Arya's anger and pounces on Joffrey, biting into his arm. Mycah escapes, but is eventually found and killed by the Hound. Cersei and Joffrey demand punishment. Arya sends Nymeria off into the woods, hoping that will mean nothing can be done, but Joffrey isn't one to let go of a perceived slight. Instead, Joffrey and Cersei have Sansa's direwolf, lady, beheaded. Nice way to treat your betrothed. Tried to Kill Tyrion during the Battle of the Blackwater During the Battle of the Blackwater (seen in the season 2 episode "Blackwater"), Joffrey doubly shows just how terrible a human being he is. Not only does he retreat from the battle, leaving others to die in his stead, he also sends out one of his Kingsguard, Ser Mandon Moore, to kill Tyrion Lannister, who is leading the men on the front line. Not only is he trying to kill his own uncle, but the act could have cost the lives of many in the city if Podrick hadn't saved Tyrion. Killed Ros Just For Fun If you weren't sure whether or not Joffrey was a sociopath before, this should have been the final clue. In the season 3 episode "The Climb," Littlefinger, who found out that Ros leaked information to Varys, gives Ros to Joffrey for an evening. Joffrey has Ros tied to his bedpost and then uses her for crossbow practice. Its murder just for fun and shows just how warped Joffrey really is, even if Littlefinger is partly responsible. Torturing Sansa Joffrey spent a lot of time making Sansa's life miserable, so it can be hard to nail down one primary example. If we had to pick, I think it would be forcing Sansa to gaze upon her father's head, perched on a spike on the wall. It may be the one scene that best exemplifies how absolutely devoid of empathy Joffrey really is. Had Ned Stark Executed Ned Stark was an honorable man, and he had to swallow his pride to call himself a traitor in the hopes of getting mercy from King Joffrey. Joffrey goes against the wishes of his small council and his mother and, instead, has Ned Stark beheaded, thus plunging Westeros into the War of Five Kings. All the pain and suffering since has been caused by this one, childish act. Game of Thrones airs Sunday nights at 9 p.m. ET on HBO.