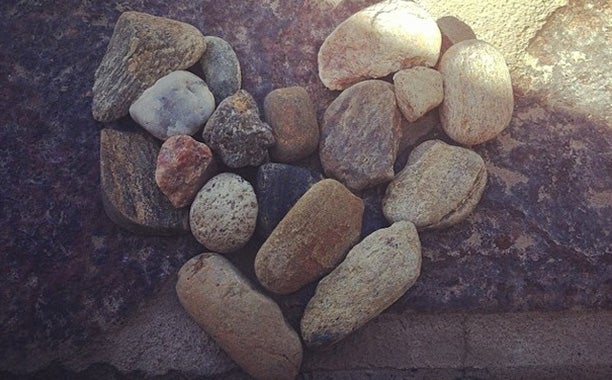 Spoiler Warning: This article contains spoilers for both the Game of Thrones TV seres as well as A Storm of Swords novel. Back in April, Game of Thrones star Lena Headey posted an Instagram photo or a bunch of rocks arranged into a heart shape. Because Lena had previously posted a spoiler to Instagram, most fans took her image of rocks in a heart shape as an indication that Lady Stoneheart would be making an appearance during Season 4 of the show.

During Monday night's Jimmy Kimmel Live, Kimmel held up a printout of one of Lena's Instagram posts of herself with her thumbs pressed up against the eyes of the Pedro Pascal, who played the Red Viper. Kimmel pointed out that the way Red Viper wound up dying was that his eyes got thumbed out of their sockets. When Kimmel asked Lena if she had to get clearance to post that photo, she said, "No." When Kimmel asked if people were upset that she had done this, Lena joked, "They haven't said so. Maybe, I'll die this year."

Then, Kimmel showed a printout from Lena's Instagram of rocks arranged into a heart shape. Kimmel said, "Because I saw this that you posted on your Instagram also, which everyone thought was a reference to a character from the books. And everyone thought that since you did the last one, this meant Lady Stoneheart…is that the name of the character…was going to be a part of the show. And then that didn't happen."

"No, that was me drunk in Palm Springs going this is so pretty," replied Lena.

So, do you believe Lena that the rocks in a heart shape was just a drunken Instagram of something she found pretty? Or was Lena intentionally teasing fans about something she knew wasn't going to happen on the show?