The season finale of Game of Thrones is almost upon us and what a season it's been. There's still plenty of loose ends to tie up though. What will be Tyrion's final fate? Will Bran ever make it to the Three-eyed Crow? Where will the Hound take Arya now that they've been turned away from the Bloody Gate? Well, you could just read the books to find out. Or, you know, wait six days and watch the finale. But, just in case you live at that intersection of too impatient to wait for the episode to air and too busy to read, we've got a detailed look at the trailer for the season finale.

I have read the books, so I have a pretty good idea of what's going to happen even without watching the trailer. That said, if this season has taught me anything it is that the showrunners are no longer shy about changing things up. I've done my best to offer analysis based only on what is shown in the trailer, followed by spoilers – hidden by our spoiler tag – where appropriate for those who don't mind them. 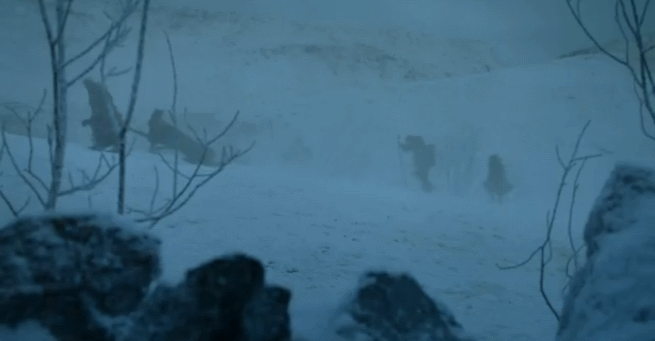 It's cold beyond the Wall. Looks like Bran and company aren't faring too well at this point. It's a good thing that Jojen tells them they've already reached their destination.

That destination is the great weirwood tree that the Three-eyed Crow in Bran's dreams has been been leading him to for quite some time (seen in the image at the top of the page).

The Three-eyed crow is also the Last Greenseer, with the ability to see through the eyes of the Weirwood trees, a skill he will teach to Bran. He also has a friend. The name of the episode is "The Children," which likely refers to the Children of the Forest. In A Dance with Dragons, Leaf, one of the Children, saves Bran and his group from some Wights and leads them to Three-eyed Crow. 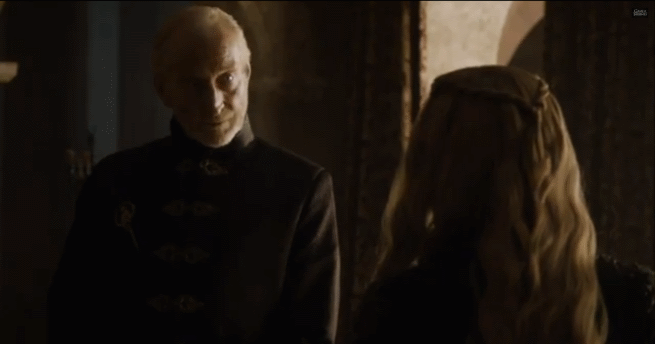 In this scene, Tywin and Cersei appear to be having a conversation. Hard to say what this is about. Cersei should be pretty happy with the results of Tyrion's trial, but Tywin has to deal with the effects of Gregor Clegane admitting he killed Elia Martell during the combat with lots of witnesses on hand. The Martells still have Myrcella in their care, so Tywin and Cersei may be conversing about the princess's wellbeing and how to appease House Martell. 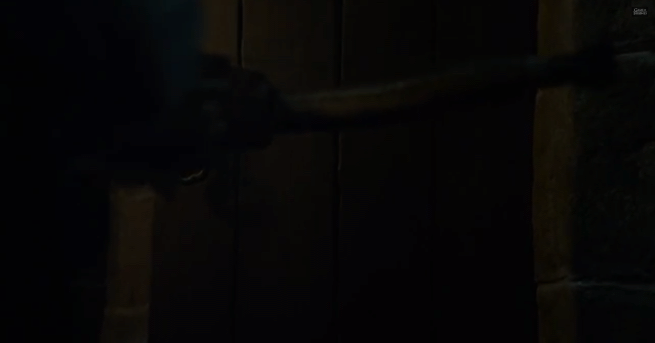 That appears to be a crossbow being carried by someone who is trying to be very sneaky, which probably means they're up to no good. You'll also notice that the person's elbow is lower than the door handle. Could it be Tyrion?

It is. And that door? It leads to his father's chamber. Things are going to get real interesting once he goes inside.

I really wish this scene wasn't happening. Bad enough they turned Jaime into a rapist earlier this season, which was not part of the books, but now they have Cersei apparently coming back for more, which also does not happen in the books and is infuriating. I can't even pretend to understand what the showrunners are thinking with this scene, so I'm just going to move on. 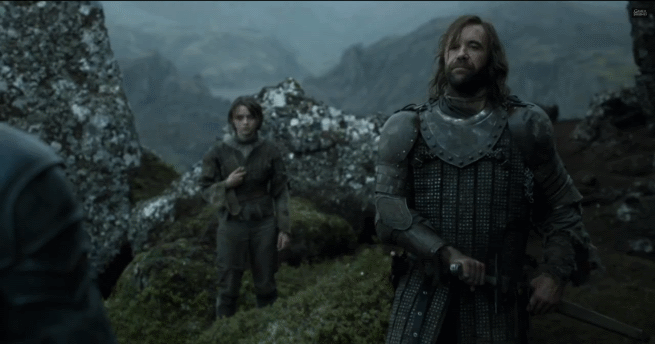 Apparently Arya and the Hound run into someone on the road. I can't really say who it is because they've rearranged the order of events in this particular plotline quite a bit. The locaton still looks like they're in the Vale, so perhaps the Hound is trying to someone sneak around the Bloody gate...? That shouldn't really be possible, but maybe he's crazy enough to try. 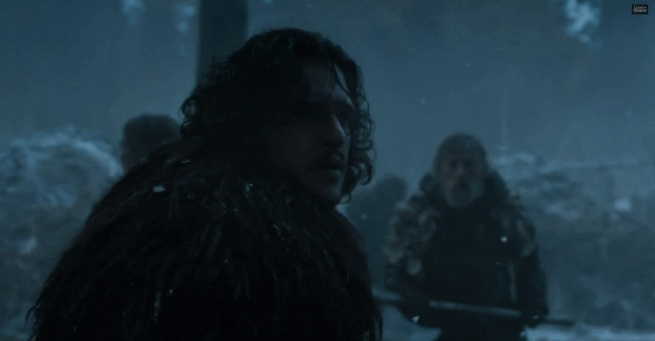 So it looks like Jon runs into some Wildlings when he decides to walk into the Wildling camp. Go figure. 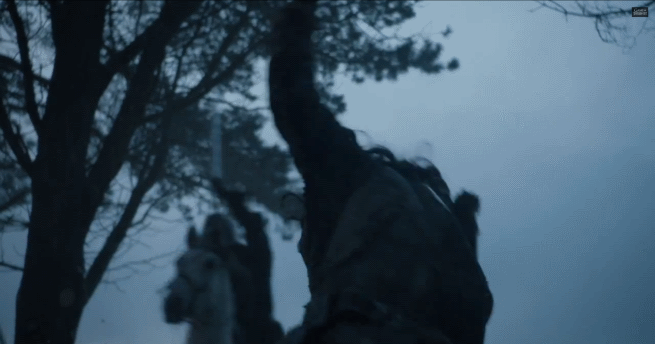 This is a Wildling getting attacked by guys on horses. The Night's Watch doesn't do much riding around on horses. A new player in this battle?

Yup. It's the army of Stannis Baratheon, come to the Wall to save the day. Things get complicated from there. 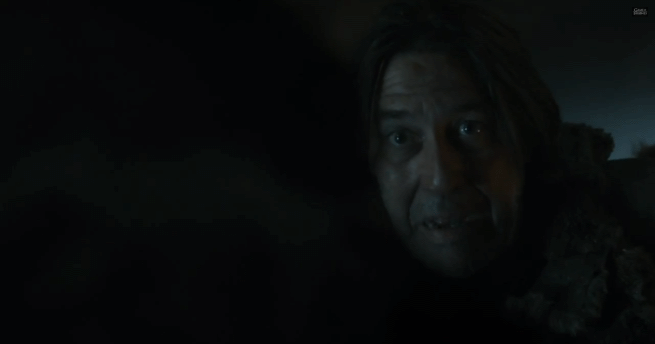 Seems the closest Jon gets to killing Mance Rayder is having a conversation with him. Mance says he's going to kill every man in Castle Black. 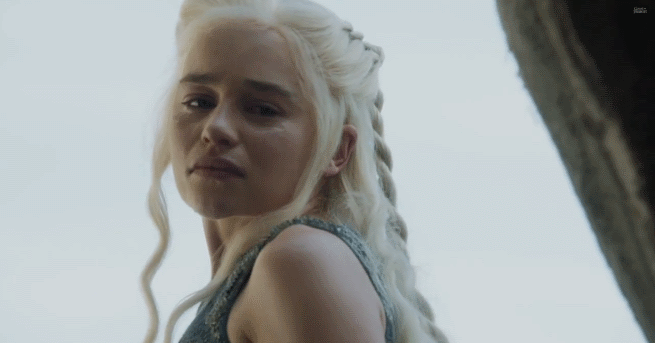 Sad Deanerys is sad. She is most likely weeping over having to send Jorah into exile, though it's possible this has to do with the actions of the growing resistance to her rule in Meereen. Probably just Jorah though.

Interesting that they spotlight Varys here. He hasn't really done much this season besides testify against Tyrion, but perhaps he has a role to play in the season finale.

He does. He and Jaime Lannister will help Tyrion escape before execution. 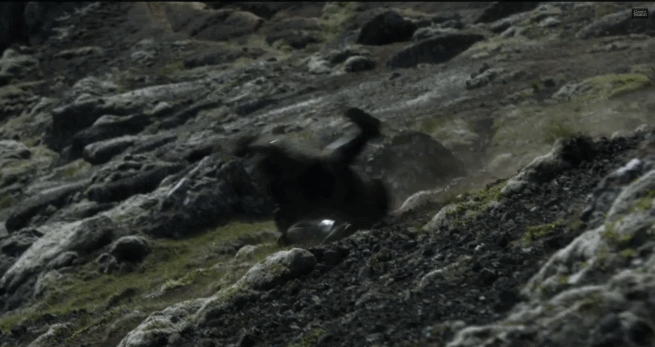 Someone is taking a tumble down a hill, in full armor. Most likely candidate, based on the look of the tumbler and the location, is the Hound.

Almost certainly the Hound. That wound he wouldn't let Arya burn is finally going to get the better of him. 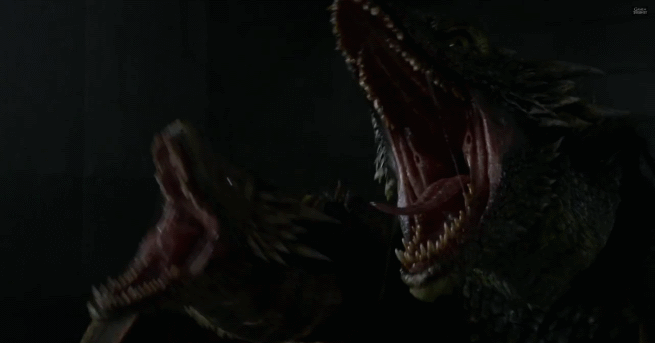 These dragons are just so board that they cannot stop themselves from yawning. Okay, not really. They could be screeching at anybody, there's really no context here and screeching is just kind of what they do.

The Season Four finale of Game of Thrones airs Sunday, June 15 at 9 PM ET on HBO.