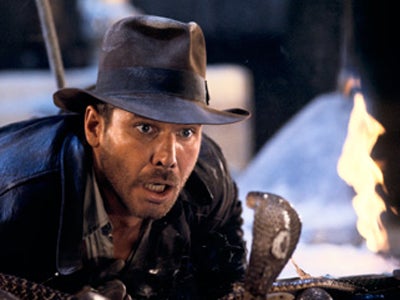 Walt Disney Studio has taken over the rights to the Indiana Jones franchise, Variety reports. Under the arrangement reached with original exhibitor Paramount, Disney will take over distribution and marketing rights to future films, as well as retaining the ownership rights it secured when it acquired Lucasfilm. Paramount will continue to be responsible for distribution of the existing films and will receive a financial participation on any additional movies. While Disney management valued the Indiana Jones franchise at zero when they purchased Lucasfilm and said that there were no plans to make new movies with the character, series star Harrison Ford--whom the studio reportedly is eager to sign for new Star Wars installments--has said that he'd rather do more Indiana Jones than more Star Wars. Some have speculated that a compromise could be reached by promising him a little from column A and a little from column B. Director Steven Spielberg would also supposedly be keen to return to the franchise, assuming the story was good enough to merit his involvement. After acquiring Marvel Entertainment, Disney had to buy the rights to the Iron Man and Avengers films from Paramount, as well. As with Indy, Paramount retains a small financial stake in those.