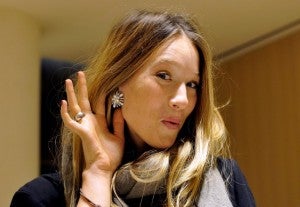 's upcoming Alice in Wonderland-centric spinoff series will be titled Once: Wonderland, according to ABC. Presumably, the title "Wonderland" was out of the question due to ABC's having already made a show by that title--a short-lived medical drama set in a psychiatric hospital--years ago. Deadline reports that Australian actress Sophie Lowe will play Alice,"who has a generous heart but carries the scars of a long hard life. She is joined by two other characters, Cyrus (Peter Gadiot), Alice's love interest with a background shrouded in mystery, and the Knave of Hearts (Michael Socha), a sardonic adventurer, a man of action, a loner and a heart-breaker." Set in the world of Once Upon a Time, the series takes place in pre-curse Wonderland. Recently, with an eye toward the launch of Once: Wonderland, ABC replaced Captain America: The Winter Soldier star Sebastian Stan, who formerly played the Mad Hatter on Once Upon a Time. His hectic shooting schedule on the Marvel sequel would have made regular appearances nearly impossible and the network reportedly didn't want to go into the spinoff with its hands tied.