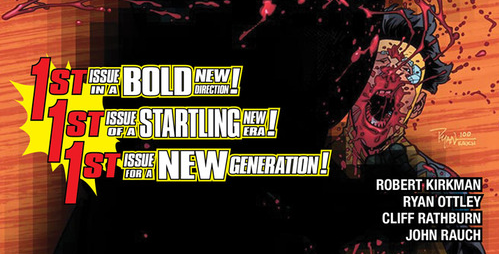 , Robert Kirkman said that he and Invincible artist Ryan Ottley had been joking that The Walking Dead's Robert Kirkman was taking over the long-running superhero title, leading to a darker, more violent and shocking comic than ever. Well, Skybound Entertainment have posted your first look at the new direction, in the form of a (mostly redacted) cover to Invincible #111, due in stores on April 16, along with solicitation text for the issue. You can see both below the jump. 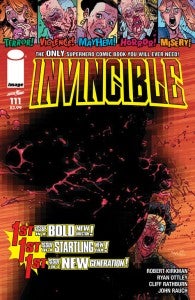 INVINCIBLE #111 STORY: ROBERT KIRKMAN ART / COVER: RYAN OTTLEY & JOHN RAUCH APRIL 16 32 PAGES/FC/T+ $2.99 THE WALKING DEAD CREATOR ROBERT KIRKMAN WRITES INVINCIBLE!! A new beginning for INVINCIBLE as things take a turn down a dark path. Everything changes as Invincible is betrayed by one of his own. You won't want to miss this explosive issue #1... 1... 1. It packs the punch of THREE relaunched number one issues! IN ONE BOOK!