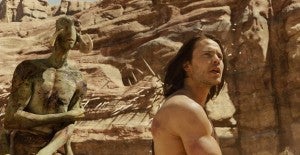 This weekend, the eagle-eyed box-office observers at The Hollywood Reporter noticed that John Carter, Disney's massive commercial flop from earlier this year, had jumped to #12 at the weekend box office, up from the thirty-eighth spot just a week previous. How did it happen? Well, John Carter was paired by Disney with The Avengers in over 150 drive-ins around the country, meaning that when people paid for a double-feature ticket to go see Captain America and company, they spent some time on Mars as well, and John Carter reaped the benefits. The film--which we actually liked quite a bit--grossed $1.5 million this weekend, and almost all of it from drive-in theaters. According to THR, the average cost for a drive-in ticket is $8, although studios do not disclose how they account for those dollars in box-office reporting. "Having something like 'The Avengers' though really goes a long way," Rich Greenfield, an analyst with BTIG Research, told Forbes, who are reporting Disney's second-quarter revenues have beat their catious, post-John Carter estimates. "These are things that you can leverage through the Disney channels. These are things you can leverage through the parks. These are things you can leverage on the broadcast network." With only $70.8 million to its name, John Carter's domestic take has been downright anemic compared to The Avengers, which made $207 million in its first weekend of release. John Carter fared far better overseas, although by now it's likely that The Avengers' domestic take has eclipsed even that number--as of Monday it was only about a million dollars more than Marvel's opening weekend take. Directed by Wall-E's Andrew Stanton and based on the novels by Tarzan creator Edgar Rice Burroughs, John Carter started its life with some pretty lofty expectations. Those were scuttled during production, when rumors began to swirl that the budget was spiraling out of control and Disney, who produced the film, was not happy. Shortly before the film hit theaters, word in film circles was that the movie was incredibly expensive, incredibly risky and unlikely to make its money back--a prophecy which was fulfilled when it debuted at #2 behind The Lorax, then already in its second week.