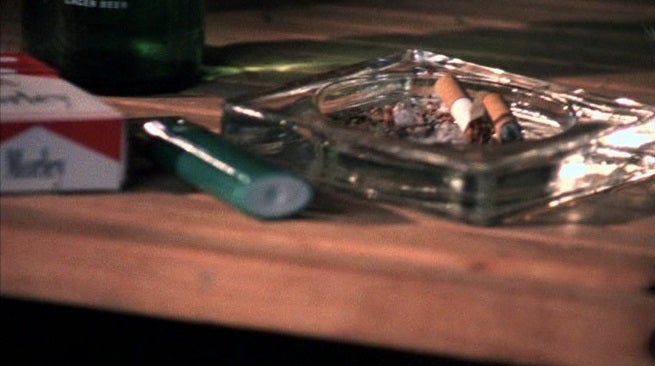 Tonight on AMC's The Walking Dead, Daryl had a smoke -- the first time we've seen anybody smoking on the show in a while.

Maybe since Dale, actually, who smoked Morleys, the same brand Daryl uses here and a recurring prop-brand used to avoid endorsing or sponsoring a specific brand of cigarettes.

(Of course, they look so much like Marlboros, it's kind of a wasted effort.)

The brand's most recognizable appearance was on The X-Files, as the preferred brand of the series big bad The Cigarette-Smoking Man. They've also appeared as an Easter egg in Californication, the Showtime series starring The X-Files' David Duchovny. On AMC, they previously appeared on Breaking Bad.

What's also worth noting is that Morley's is a recurring prop in The Tommy Westphall Universe, of which The X-Files is a part. That's the shared universe containing series like Law & Order, The X-Files and St. Elsewhere, identified by their shared characters by comic book writer Dwayne McDuffie.

...Does that mean The Walking Dead is all happening in the head of an autistic child?

The Walking Dead: Daryl Smoked The Same Brand Cigarettes as Dale...And On The X-Files and Breaking Bad

My Hero Academia Gives the League of Villains a New Name