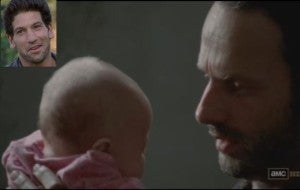 In an appearance at Wizard World Chicago Comic Con over the weekend, former Walking Dead actor Jon Bernthal answered questions about the show. While Jon Bernthal's character Shane Walsh has been off the show for awhile, it appears that Bernthal believes that there is a part of Shane still there. While Rick Grimes was believed to be dead, Shane Walsh hooked up with his best friend's wife Lori Grimes. After Rick returned, it was revealed that Lori Grimes was pregnant, but it was unclear who the father of the baby was. One of the big mysteries on the show has been who the real father of baby Judith is. When asked if he thought baby Judith was Shane or Rick's baby, Jon Bernthal said, "100% Shane's baby." As the crowd applauded, Jon Bernthal added, "That baby's going to have a big, old busted nose and giant-ass ears, you know what I mean, 100% Shane's baby." The Walking Dead Season 4 premieres on Sunday, October 13 on AMC.