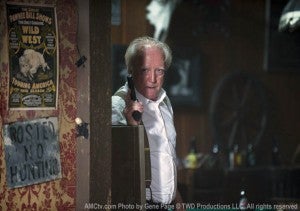 While Hershel Greene's life hangs in the balance following the events of Sunday's season premiere of AMC's The Walking Dead, whether he makes it or not he won't be the only familiar face staring down death by the time the season wraps up, according to series executive producer Glenn Mazzara. "There's no place we won't go. Everything is on the table. This is a cutting edge cable drama. I'm comfortable with that material and we answered a lot of these questions on say The Shield and when I worked there, so I'm comfortable dealing with very, very edgy material," Mazzara is quoted as saying at Screen Rant. "That being said, you want to make sure that things are not gratuitous, that things are not offensive for the sake of being offensive. I don't ever want the show to get too bleak. I think we've done a good job of creating characters that people care about. I think there's a heart to the show." The Ask Ausiello column at TV Line suggests that a major character "will become zombie kibble" at some point in the season, although TV Line can't say whether it would be during the first half of the season or the second--and similar terminology has been used in the past to offhandedly refer to any death (basically The Walking Dead's version of "he's worm food"), so taking it too literally to mean that someone will be killed by zombies is probably a stretch. Who might be taking the long dirt nap is anybody's guess; while there are certainly a few characters in the comic book source material that don't live much longer than what would seem to be this season for the purposes of discussion, the show has not been shy about changing around, repurposing or ignoring events from the comics when the writers feel the change makes for more dynamic television.