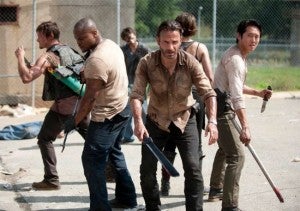 Last night's season premiere of AMC's The Walking Dead drew 10.9 million viewers, improving by half over last year's stellar season premiere ratings and becoming the highest-rated drama in basic cable history and the highest-rated premiere of the fall season in the coveted adults 18-49 demographic. "We are honored and humbled that television's largest adult audience resides on AMC. So many people on both sides of the camera worked tirelessly on this project, and I thank and congratulate each of them for their amazing contribution," said AMC president Charlie Collier. The Walking Dead encored at 10pm with 3.5 million viewers and midnight with 850,000 viewers delivering 15.2 million viewers for the night. In addition, the season two premiere of the post-game commentary Talking Dead at 11pm attracted 2.1 million viewers, growing 85% over the season one premiere.

The Walking Dead Premiere Is the Biggest Show of the Season