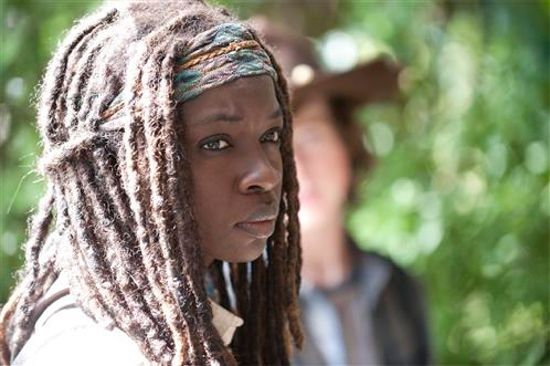 The "Claimed" episode of The Walking Dead opens with Tara riding in the back of the truck that appeared at the end of the last episode. The truck is passing by a number of walkers on the roadway, and Tara is writing down street locations on her hand to remember the way they are traveling. When the truck stops, there are three walkers at the side of the truck reaching up. Tara points an automatic weapon at the walkers, but Abraham barks, "Do not fire that weapon." Abraham then gets out of the truck, and he starts dispatching the walkers with a crowbar. When his crowbar gets stuck in a walker head, he asks to borrow Tara's gun. He then smashes the walker's head with the butt of the gun. Tara tells Abraham that she's never seen that before. When Abraham says that he saw her do the same thing, Tara responds that Abraham was smiling when he did it. Abraham replies, "Well, I'm the luckiest guy in the world." He then asks Tara to help him get gas from one of the abandoned cars on the road, telling her that they have some miles to go. Carl is eating cereal, when Michonne brings him some bottled water. Carl looks at Michonne and laughs. Michonne says, "Do you have something to say about my extremely comfortable and attractive shirt?"  Carl says it looks great, but he points out that she missed a button. Michonne says she wishes they had some soy milk, and Carl relays a story about almost throwing up after trying soy milk. Carl says, "I would rather have powdered milk than to have to drink that stuff again. I would rather have Judith's formula.." Carl stops himself, and he gets up and leaves the room, saying he is going to finish his book. Rick is in the kitchen, when Michonne joins him. Rick says he heard Carl laughing and thanks Michonne. Rick says he can't be both Carl's father and his best friend. Rick says Carl needs her. Michonne says she will go with Carl to get some more supplies. Rick offers to go as well, but Michonne says he still needs to recover. Rick walks Carl and Michonne outside, and they take off together to get supplies. Rick goes back into the house, shutting the door behind him and pushing the couch up against it. Rick seems to aggravate his injuries pushing the couch, so he goes upstairs and lies down in bed to read. Carl and Michonne are leaving another house. Michonne asks Carl if he found anything good. Michonne shows Carl some crazy cheese that she 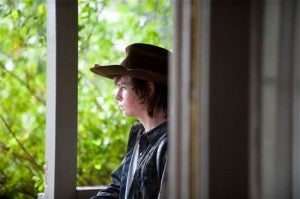 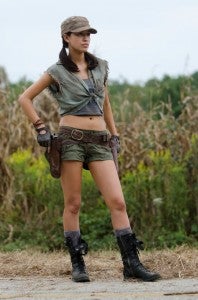 Glenn says sorry and starts to walk away again. Abraham follows Glenn. Abraham says Tara told them what when down. He says that there is zero chance that Glenn will ever find his wife again either alive or dead. He tells Glenn to get back in the truck and do something with his life. Abraham tells Glenn that when the people we love disappear it doesn't mean that he has to go out that way too. Glenn turns around and punches Abraham in the face, knocking him to the ground. Abraham gets up and tackles Glenn, and they start fighting. Abraham is on top of Glenn choking him. Tara and Rosita are trying to break up the fight. When some walkers come out of the field, Eugene grabs a weapon and starts firing at them. In addition to shooting walkers, Eugene also hits the truck. Abraham tells him to stop firing that they need to get their weapons. Abraham, Rosita, Glenn, and Tara grab weapons, and they kill the rest of the walkers. After all the walkers are dead, Abraham notices that the truck is leaking. Rick starts crawling out from under the bed while the man above him is sleeping. Rick is looking down at the man, when someone calls out for Tony and Glenn to get down there. Rick runs to hide in another room. Someone comes into the same room with a tennis ball and bounces it off the wall, right beside where Rick is hiding. Rick tries to open windows to get away, but the windows are all sealed. One of the men starts yelling about how a woman is shacking up in there, and the men go downstairs. They've found Michonne's shirt, saying it smells like she just washed it this morning. Rick goes into a bathroom, but another one of the men is in there. Rick and the man wrestle, and Rick strangles the man to death. Rick opens a window, but he cracks the door before leaving. Rick climbs out on the window ledge, climbs down the drainpipe and drops onto the back deck of the house. Rick circles the house with the gun he took from the man in the bathroom. As he hides next to the front porch, he hears the man bouncing the tennis ball. Abraham is working on the truck. He's talking about all the truck has been through, and he asks Eugene how he managed to kill the truck. Eugene says, "A fully ramped up state and an ignorance of rapidly firing weapons." Glenn tells Abraham that he's sorry about his ride, and he walks away. Tara follows Glenn. Then, Rosita starts to follow Glenn and Tara as well, asking what else they are going to do. Eugene tells Abraham that they should go with them, because they know that way is clear. Eugene tells Abraham to trust him, because he's smarter than he is. Eugene and Abraham grab weapons and supplies and follow Glenn as well. Rick is still hiding beside the porch. Another man comes out and sits on the porch. He's eating out of a can, and he whistles. Rick sees Michonne and Carl returning. Suddenly, there is a noise inside, as the man that Rick killed has re-animated as a walker. Rick runs out and tells Michonne and Carl to run away. Abraham is talking to Tara and says that she gets why she is following Glenn in that she is loyal. Abraham says Tara is a good person, but he says what they are doing in saving the world is more important. Tara says Abraham doesn't know that she's a good person. Abraham laughs and says she's good. Tara says she doesn't get why Abraham is going to Washington. She says Eugene is going because he's the only one that knows how to stop everything, and Rosita is going because she loves Abraham. However, she's suspect that Abraham is going just to save the world. Rick, Carl, and Michonne are walking down the train tracks. They come upon a railway car. Michonne asks Rick what he thinks, and Rick says, "Let's go." The railway car has a sign that says, "Sanctuary for all. Community for all. Those who arrive, survive."