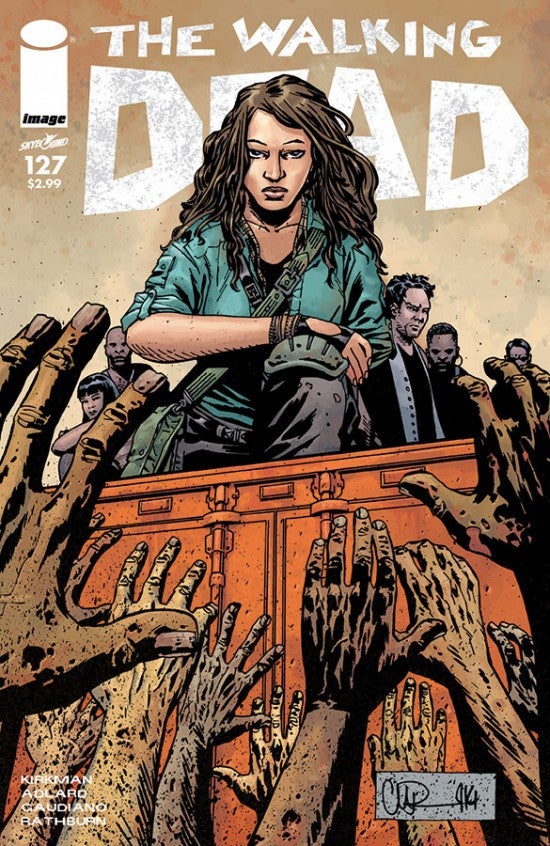 The Image Comics solicitations for May have revealed the first cover for Robert Kirkman and Charlie Adlard's The Walking Dead to come out post-"All-Out War," and...well, it's generating a lot of chatter among the book's fans. Due in stores on May 14, the issue's cover features...nobody recognizable. No Rick, no Carl, no Negan, no anybody. And with a solicitation text for the double-sized issue trumpeting "A New Beginning," the implication seems clear: Kirkman wants fans to suspect that Rick (and possibly Carl and the rest of their group) die during "All-Out War" and that readers will be left to follow an entirely new group of survivors beginning with #127. It's long been speculated that Rick would die during this story, particularly because of the odd relationship between Carl and Negan that would make Carl killing him seem like an obvious end to "All-Out War." Since Kirkman got into the "kill somebody on a big number" thing with The Walking Dead #100, it wouldn't be out of the question for a major arc ending in #126 to see Rick die in #125, with #126 being a mad suicide run for vengeance by Carl, Michonne and Andrea, taking out as many of the Saviors as they can and bringing the war to Negan personally. Still, in the event of Rick's death, fans have always assumed that the title would default to Carl, not unlike Kirkman's self-professed favorite comic, Savage Dragon, which sees the son of its title character taking over the book with tomorrow's issue. 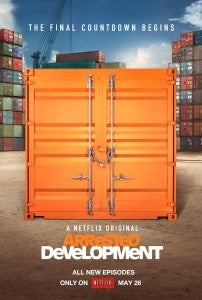 If true, this wouldn't be the only major retooling of a Kirkman book on the horizon; Invincible is expected to get dark and gritty, with a "bold new direction" that even matches Savage Dragon's trade dress, in April. Speaking of similar trade dress, another word for "A New Beginning" could be "a new start," bastardized as "ASNUSTART" on Tobias's license plates in Arrested Development. Well, check out the poster for Arrested Development Season Four and compare it to where these unfamiliar Walking Dead survivors find themselves. Hmm...peculiar... THE WALKING DEAD #127 STORY: ROBERT KIRKMAN ART: CHARLIE ADLARD, STEFANO GAUDIANO & CLIFF RATHBURN COVER: CHARLIE ADLARD & DAVE STEWART MAY 14 48 PAGES/BW/ M $2.99 In the aftermath of ALL-OUT WAR we discover… A NEW BEGINNING.

The Walking Dead: Will Rick Grimes Die in "All-Out War?"