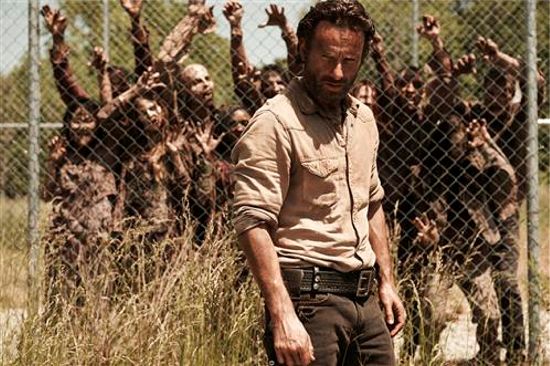 Tonight on SundanceTV's The Writers' Room, Oscar-winning screenwriter and Community star Jim Rash will host The Walking Dead creator Robert Kirkman along with Smallville executive producers Al Gough and Miles Millar, TV Guide's Michael Schneider and Attack of the Show alum/occasional comic book writer Blair Butler for a discussion on -- as you could probably guess -- comics on TV. Spinoff Online has a clip from the episode, in which a fan asks Kirkman to explain why, in the TV series, The Governor never cut off Rick Grimes's hand -- a traumatic and memorable moment from the comics and one of only a handful of truly memorable story beats that haven't happened in the series. For quite some time now, the conventional wisdom has been that Kirkman opted not to go that route on TV because he regretted doing it in the comics, but Kirkman rejected that in the interview. "I like the fact that he lost his hand in the comic," Kirkman told the fan. "To be perfectly honest, the practical difficulties of having a guy who doesn't have a hand is extremely complicated in the comic and would be impossible in the show. For instance, in a recent issue, I think it's #122 or 123, Rick is standing on top of a truck. It would take him quite a while to climb on top of a truck with one hand, but we just show him standing on that truck. And you're reading that comic, and you're like, 'There he is on that truck.'" He added, "Yeah, but spoiler alert, he loses his hand in Season Five, so..."

The Walking Dead's Kirkman: Rick Losing a Hand Would Be "Impossible" On TV

Ewan McGregor Talks Star Wars Prequels Love: "It Didn't Feel Like That When They Came Out"