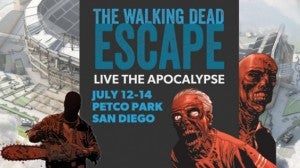 Celebrating 100 issues of Robert Kirkman's fan-favorite series The Walking Dead, Image Comics and Kirkman's Skybound imprint will take over Petco Park in San Diego during Comic-Con weekend, transforming it into an obstacle course that will simulate the early days of the zombie apocalypse for fans lucky enough to be there. According to The Hollywood Reporter, Kirkman and company have the event (titled The Walking Dead Escape: San Diego) so that fans can participate as survivors, zombies or audience members (although why you wouldn't want to be a survivor or a walker escapes me). It will run from July 12-14, coinciding with most of Comic Con International, which will run in the city from the 12-15 with a preview day on July 11. "Our fans have been reading about it, watching it and now they get to live it with The Walking Dead Escape," Kirkman said in a press release. "We are literally transforming Petco Park into the early days of society's collapse and San Diego is just the first city to fall." Come July, ComicBook.com will do our best to have photos and videos from the scene.

Marvel's Guardians of the Galaxy TV Spot Revealed Ahead of Release