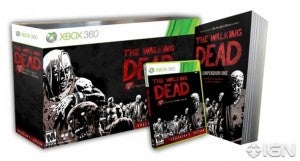 Customers who buy their upcoming console-disc version of Telltale Games's The Walking Dead at GameStop will can either buy the "standard" edition for just under $30, or a collector's edition, retailing at $69.99, which includes a new print of The Walking Dead Compendium One, reprinting the first 48 issues of the Image Comics series, with an exclusive new cover from series artist Charlie Adlard. The catch? In addition to being exclusively available through GameStop, the retailer says that the edition is an extremely limited print run and that it will only be available via pre-order. The game, which collects all five episodes of the game (four of which are already available) will hit stores on December 4. It will be available on PlayStation 3 and XBox 360.