Shattered Grid will have a huge impact on the Power Rangers' universe, and fans will want to pick up the Free Comic Book Day tie-in.

Mighty Morphin Power Rangers Free Comic Book Day Special will be part of 2018's annual Free Comic Book Day (May 5, 2018), and tells the story of how and why Zordon turns to the Morphin Masters for help in the Ranger's darkest hour, as they take on Lord Drakkon and his forces. Kyle Higgins (Mighty Morphin) and Ryan Parrott (Go Go Power Rangers) will handle writing duties while Diego Galindo (Jim Butcher's The Dresden Files: Dog Men) will handle the visuals. The issue's cover will be handled by Jamal Campbell (Mighty Morphin). 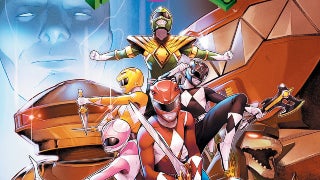 “Ever since I started working on the Power Rangers comics with BOOM! Studios and Saban Brands, I’ve been leading up to this SHATTERED GRID event, and this FCBD book is an essential part of that storyline,” said Kyle Higgins. “This issue will have something for everyone, and best of all, it’s free!”

“FCBD is a golden opportunity to give someone a free comic that can ultimately become their gateway book into more comics," said Ryan Parrott. "This Power Rangers issue is our way of introducing the comics to new readers while advancing the SHATTERED GRID storyline at the same time."

Shattered Grid is the first comic book event of its kind in the Power Rangers universe and officially kicks off in March with Mighty Morphin Power Rangers #25, which will be sealed in a black polybag to help prevent spoilers. Parrot's Go Go Power Rangers will tie in with Go Go #9 as well.

“Current fans of our Power Rangers comics are going be ecstatic to get an original story that ties into our major event next year,” said Dafna Pleban, Editor, BOOM! Studios. “But the casual fan can also pick it up and get a taste of the great Power Rangers comics they’re missing!”

“The Saban Brands team is so excited to be a part of Free Comic Book Day and to offer a cool, fresh Mighty Morphin Power Ranger adventure for our current readers to enjoy while giving new readers an opportunity to discover this award-winning comic book series, which we are all so incredibly proud of,” said Brian Casentini, Executive Producer, Power Rangers Content.

You can find out more about Shattered Grid here, and the FCBD issue's cover can be found in the gallery. Mighty Morphin Power Rangers #25 kicks off the event on March 21, 2018.