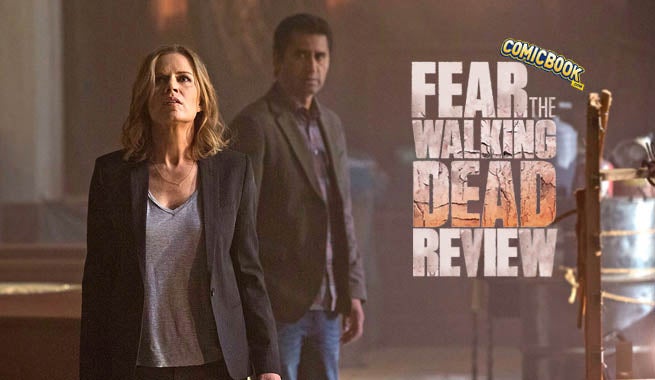 Fear The Walking Dead comes along with some big, big shoes to fill. Well, maybe those shoes aren't empty seeing as The Walking Dead is still on air, but Fear has an extremely high standard to strive for given the success of it's older companion. Fear promises to fill in some gaps of what it was like when the world fell apart on the West Coast while Rick Grimes dozed off in the East, but does that make for good television? It sure looks like it.

In its premiere episode, Fear The Walking Dead is burdened with introducing an all new cast and setting to a universe that viewers are already familiar with. The pacing may feel a little slow at first because, as an audience, we've become accustomed to survivors pulling out guns and knives to dispatch walkers as if it were common practice as result of five seasons of The Walking Dead. However, Fear hits home when it takes us to school, shows us family life, and other common day to day activities we so often take for granted or forget about when watching The Walking Dead where the apocalypse has become the only life known. By the episode's final third, director Adam Davidson pushes down on the gas just enough to leave us hungry for episode two.

Luckily for Fear, it has a talented cast in Cliff Curtis, Kim Dickens, and Alycia Debnam-Carey (among others) who carry the premiere episode through their origin stories. The actors bring their characters to rich life with fantastic chemistry, especially the home run performance by Frank Dillane. But the writers also plant seeds for their characters' curious backstories to arise and add layers which even The Walking Dead may have lacked in its early going.

As the producers and writers have described, Fear is truly about its characters. We meet a family which is attempting to blend, comprised of two divorcees, Travis (Cliff Curtis) and Madison (Kim Dickens), and their very unique-to-one-another kids. The family drama presents it's own focal issues for the series which is a stimulating new concept for characters we know are facing an imminent doom. Survival isn't the show's focus by any means, yet. Rather, it's on relationships. It's about being a father, a husband, a mother, a wife, a teacher, a teenager... "Pilot" introduces several characters pre-apocalypse, setting our anxiousness for the inevitable transformations they'll all experience.

The streets of Los Angeles are refreshing compared to The Walking Dead's normal backwoods quarters. A cityscape in southern California not only changes what the surrounding's visual landscape, but how the characters interact. The populations in Georgia and California are comprised of two very different brands of people, which writer/creator Robert Kirkman and Dave Erickson kept in mind here. The series' first ninety minutes barely unpacks the setting's storytelling potential, but based on the characters we meet, it will build the show's personality in future episodes.

The setting isn't the only aspect of Fear which sets it apart from Kirkman's East Coast counterpart. As mentioned earlier, the characters are very rich right off the bat, but in addition to that, the issues we see them face in this Pilot have almost nothing in common with The Walking Dead. Where Walking Dead's first season saw a thought widowed wife moving on to her husband's best friend and police partner, Fear sees an apparent faithful and happy relationship between two formerly married, middle-aged school teachers who are struggling to earn the respect of their children and keep their family together. And that's pre-apocalypse! Are the kids going to come running to mom and dad for help when walkers are chomping at the bit to devour them? It's family drama with an impending doom which may or may not render all the little things irrelevant. There's no Governor or horde of zombies forcing our characters under cars or into retreat, right now.

There is not, by any means, an overwhelming presense of zombies in the episode despite the feeling that there is. It's genius. We want to see zombies, we know they're coming, but instead of giving it all up on the first night, Kirkman and Erickson tease us and hook us in for more. If we want full on zombie killing, we can re-watch episodes of The Walking Dead. But if we want to go back to the beginning and watch how it all unfolded, we have to patient. We have to join the new characters on this ride around Los Angeles and Fear welcomes us to do just that.

The actual narrative fueling The Walking Dead and Fear The Walking Dead shouldn't be compared too closely. Comparisons are inevitable given their co-existence, but their only connection lies in the mythos. Other than that, it's unlikely they'll ever cross over. And they don't need to. The characters of Fear work in the Los Angeles world and don't need any help from the talented cast and rich characters featured on The Walking Dead. Robert Kirkman clearly has a handle on them, and doesn't need to distract himself with thoughts of the two shows interacting.

As an overall television episode, Fear The Walking Dead's premiere is great. It wisely uses the audience's knowledge of what's coming against the characters who don't have that luxury. Questioning what will happen next and a hunger for answers builds major momentum in the pilot and the door is left open for a number of possibilities. We don't need all the answers in one episode. It looks like we're going to take our time and really explore what happened when the world ended, and that's exactly what makes Fear The Walking Dead so much fun.

Bottom Line: Fear The Walking Dead crafts a dramatic and exciting premiere episode through wise use of its talented cast and playing with the impending doom the audience knows to be looming but its characters do not. 8.9/10

When and Where to Watch The Walking Dead Universe Preview 2022