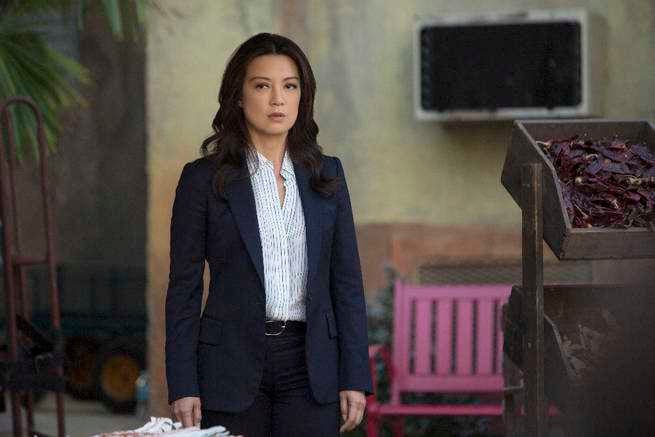 Tonight’s episode of Marvel’s Agents of S.H.I.E.L.D. is titled “Melinda” with good reason. The episode finally tells story behind Agent Melinda May’s nickname, “The Cavalry,” bringing a huge aspect of May’s back story to the forefront.

Who better to talk to about this new character development than the actress who plays Melinda May, the mighty Ming-Na Wen. Wen spoke to ComicBook.com about how this reveal effects the way she plays May and what it was like getting to portray a younger version of the character for the flashback scenes. She even shares her thoughts on the upcoming live action adaptation of Mulan, having voiced the character in the original animated feature.

Check out the first half of our interview below, and come back after “Melinda” airs tonight at 9 p.m. ET on ABC for the second half, why Wen goes even more in-depth on the episode.

How long have you known the full story of how May got “The Cavalry” nickname?

Just some knowledge of what could have happened in Bahrain, but no confirmation that was going to be the storyline. So basically, until I got the script, I really didn’t know exactly what had happened to Agent May.

How was it getting to play the seven-years-younger version of May for a while?

It was great! It was so funny though, we got to part her hair in the middle with a little bit of fluff. [laughs] We were trying to find a subtle way to distinguish her from the May that has been established besides her personality, which was still very much May, in that she’s not this outgoing, boisterous clown and then turned into this diehard killing machine. She always had a scary side to her, but at the same time there was a lightness, and a lot of love, and she was able to show her sexiness with Andrew, and her playfulness with Coulson in her earlier part of her life, before this event happened. It was great. It was great to be able to smile, and have that freedom of playing a character that wasn’t so scarred. It brought a little bit of Ming into May, finally, without getting the constant notes, over the year and a half of, “Okay, Ming: less Ming, more May.” [laughs] That was my constant note. This time I was able to bring a little Ming into her character.

Does it feel different playing the character now that the world knows her big secret?

Yeah, tremendously. To finally have the backstory revealed, it adds a greater sense of understanding, for me, of what she went through. I was just creating stories in my own head about soldiers who have post-traumatic stress syndrome. I did my research on some of the psychological scars that can come with it. It’s really great to have a real solid story, and an experience of having gone through it when we shot those scenes. It kind of really justifies a lot more who she became. For a while I used to be like, “Nobody never smiles! How is that possible?” [laughs] You know I joke all the time, but we do have a camera guy, Bill, who I love dearly, who hardly ever smiles. So I always joke that he’s my inspiration for understanding that people like that do exist in the world, because I’m so the antithesis, or the opposite, of who she is. My goal every day is trying to make Bill smile [laughs]

With May having such a history with Coulson, she probably has a unique perspective on this whole situation in the present day. Is it hard for her to separate the professional from personal right now?

That’s a good question. I think in their earlier relationship, there was definitely just more professionalism and a friendship. Over time, I think it’s becoming more complicated, both for May and for Coulson, in trying to fight the battles that they have to fight, as well as learning about all these new dynamics, and new threats that have entered into their lives. They’re really not as in control of it as they used to be about it. The Inhumans is a whole other entity, and that’s why even for May, in recent episodes, she’s like, “I don’t know how to handle Skye.” I think for May, that level of power is different form the Avengers, where you know who these people are and what their desire is, which is to fight for good and to protect the world from evil. With the Inhumans, its power that’s beyond our understanding, and that’s a huge threat and an uncertainty. And I think also, with Coulson being somewhat off the deep end sometimes, it becomes a lot more confusing and personal in many ways.

This is going back and episode or two, but how much fun was it to play May as the lone action hero, taking out enemy agents in the base one by one?

[laughs] It’s the greatest feeling in the world! I love it. I love my fight scenes, I love feeling powerful like that because, like I said, she’s completely the opposite of who I am. I have been known to be a lot stronger than I think I am, so I think if I am put to task I will find the May within myself. I had to do that to help out a girlfriend to catch a rat, so I’m very proud of that. [laughs]

Going a little off topic for my last question, do you have any thoughts about the recently announced live action Mulan movie?

Boy, there’s quite a lot of social media activity on that one. I’m excited. I certainly hope to participate in some form with the film. That would be great, and I hope they have a great storyline, and they respect that particular folklore because it is a very important one for the Chinese community. I just love the idea, with anything that Disney wants to expand on Mulan. I hope I get a part in it.

Wen wanted to invite all the Agents of S.H.I.E.L.D.fans out there to tweet her at @MingNa to let her know what they think of tonight’s episode. “Melinda” airs Tuesday, April 14 at 9 p.m. ET on ABC.

Pikachu's Gigantamax Form Changes Him in an Unexpected Way

It Looks Like Travis Scott Is Coming to Fortnite Season 2