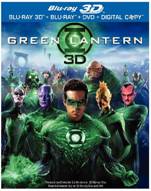 It's widely accepted that this summer's Green Lantern movie, which came to home video on Friday, is a clunky, overwrought mess. To an extent, I agree.

But I really enjoyed it.

I thought the film captured the fun and energy of the character, had a few genuinely clever moments, and wasn't nearly as hard to follow as many critics complained. That, it seemed, became the immediate narrative and viewers told the movie was confusing stayed away because you don't want to pay your $12 for that.

On Blu-Ray, in both 3D and not, viewers can see for the first time an extended cut of the film. It cleans up a few of the plot elements viewers had complained didn't fit or make sense in the theatrical version of the film, and provides more ring-projected eye candy for those of us who didn't have many complaints about the movie itself.

The video release is an interesting one, because it plays to the fans in a way that usually only truly successful blockbusters (or at least cult successes like Fight Club and Watchmen) get to do. That Watchmen and Green Lantern both have had underwhelming theatrical takes, but home video versions that did the movies justice, goes to show that DC Entertainment and/or Warner Brothers really understands the market for these films. Many fans, after seeing that the film didn't perform the way the studio had hoped financially, had openly wondered whether it would mean a substandard DVD release.

But a disc loaded with an extended cut of the movie, special features that cover both the film and the comics versions of the story and bonus digital goodies like a Batman: Arkham City skin (where you can make the playable character look like the Sinestro Corps version seen briefly in Johns's Green Lantern run) and a free download for Justice League #1 featuring Hal and Batman, it's clear that someone high up on the food chain has made a decision to make the product as appealing to the comics-reading public.

The central plot of the movie, of course, is heavily influenced by Geoff Johns's wildly popular take on Hal Jordan, the Silver Age Green Lantern who he returned to prominence with his and Ethan Van Sciver's top-selling Green Lantern: Rebirth (a title Johns discusses a bit in the disc's special features). Along with the parts that are unique to the movie, elements of Rebirth are seen here, as Hal takes on Parallax, the personification of fear and the icon of the yellow energy we all know Sinestro (depicted here by Mark Strong as Hal's hard-assed mentor) will one day wield. Since it's an origin story, though, parts of it borrow generously from Johns's Green Lantern: Secret Origin (the collected edition of which star Ryan Reynolds wrote the foreword) with bits of Gerard Jones's Emerald Dawn sprinkled in for good measure (though some--including this writer--would argue not enough).

If you've got a Blu-Ray player, pick up the extended cut. For the extra couple of bucks, you're treated to the longer version of the film, and all sorts of special features that you miss out on with the theatrical version DVD. You can