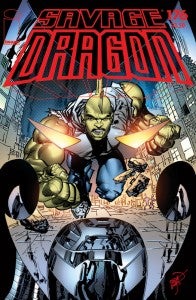 With Malcolm Dragon facing down Overlord while his father (and Vanguard) stare down the barrel of an impending (and long, long, long-anticipated) alien invasion, this month's issue of Erik Larsen's long-running, creator-owned-and-operated Savage Dragon isn't nearly as chaotic as it could be. Instead it feels like the uncomfortable moments between the calm and the storm where story threads left dangling for quite some time are starting to pull together into a single, coherent narrative. It's also been described (as in a review over at Comic Book Resources) as a good jumping-on point for new readers, with a one-and-done structure and every important character getting a little bit of time on the page (except the title character, who appears only on the other end of a long-long-long-distance phone call).

Gavin Higginbotham and Russ Burlingame talked to Larsen for the latest in our series of monthly interviews looking at the title.

Note: Because we are discussing the process and philosophy of writing an already-published issue, this conversation may contain spoilers for those who have not yet read Savage Dragon #176.

Russ Burlingame: It's funny--every year or so, somebody knocks off the Kevin Maguire cover to Justice League #1, and DC has solicited an upcoming Batman: The Dark Knight issue that riffs on Kelley Jones's famous Batman #497 cover in a couple of months. Still, whenever I see you echoing one of your own earlier covers--especially one this iconic--I have to ask if a little part of you wants to do it for the George Lucas aspect--cleaning up little things you feel were imperfect in the original.

Erik Larsen: Not really. Not in this case. There have certainly been instances where I've done a bit of that but that's a road I don't want to head down. Therein lies madness and you can be fixing art forever--tweaking things forever. In this case (and a few others) I just want to echo what has gone before. The torch has been passed and things like this emphasize that.

EL: It was inevitable.

GH: With this issue we're introduced to Adrian Weatherspoon. He instantly created a sense of familiarity with Spider-Man's Flash Thompson, so it was cool to see you refer to Flash straight away. Was that to get comparisons out of the way instantly?

EL: I think the comparison is inevitable. Stating that just lets readers know that I’m aware of the similarities.

GH: After reading you rant on Twitter about kids having to hold up their ill-fitting pants, it was hilarious to see The Spoon dressed that way. Ha!

EL: What’s crazy to me is just how long this trend has hung in there. Guys were rolling with big pants 20 years ago. Kids are dressing like their parents at this point. I don’t know how these guys organize their lives so that they always have a free hand to hold up their britches. On the plus side they have a ready excuse in case anybody asks them to help them move. But yeah--it’s pretty much a commentary on the guys loitering around Berkeley high school.

GH: Malcolm has obviously inherited his father's practicality when it comes to avoiding pointless violence. Dragon did it multiple times, it was a nice treat to see Malcolm act the same. Considering how little time Malcolm has spent with his dad, I guess you believe in nature over nurture?

EL: Oh yeah. I have kids--and they came out fully formed. There was nothing I did or could do to help mold them into something and the same can be said for me--I’m sure my dad wasn’t thinking he was going to raise a cartoonist when I was spit out.

GH: Another bit of comic referencing was Tierra acknowledging that girlfriends and relationships in general seem to be doomed. Her fear of death is refreshing as this sort of lifestyle truly would be terrifying.

GH: The Little Wise Guys' ageless nature is called out here. Will this be something we may have to wait many more years to see if they truly are ageless?

EL: Actually, no. I’ll be touching on it relatively soon. This was planting the seed. I’m going somewhere with it.

GH: We finally get to see OverLord's war with the Vicious Circle. It's interesting to see OverLord fall back on using lethal force. He's said in the past that he doesn't want to kill but he's always quick to fall back into this action.

EL: It becomes a default, I think. The firepower is literally at his fingertips and it’s hard not to use it--especially if he’s getting kicked around.

RB: As far as the woman OverLord saved (and splattered with guts) - can anyone blame her for freaking out? I mean, people still have to kinda see OverLord as a bad guy after everything, right?

EL: Oh, sure. Plus--that's a traumatic event. The guy holding you hostage gets shot in the head? You don't shake that off.

RB: We may know it ain't so, but on that note do you think a world that's seen Dragon and others come back a bunch of times considers that Seghetti or Nixon may be inside?

EL: I would imagine so. Although--he definitely is taking a different tact.

RB: On that note--we've never really explored this, but what does the corrosive power of the suit on someone's psyche mean for someone who's already struggling with the ethics of what he's doing?

EL: I don't think of the suit itself really changing the person inside. A lot of what was there in terms of influence is no longer in place--it's not as though Seghetti is in the mix still, pulling the strings.

GH: Spoon points out OverLord's contradictory nature. He says he wants peace but is quick to violence. Is this a huge clue to his identity that we're all missing?

RB: So--in the end, Adrian comes off looking pretty good, compared to where he started. Is it just his way or trying to save face after getting punked while trying to fight with Malcolm or is this a new direction for him?

EL: I don't think this really changes anything. It shows he stands up to people even if he doesn't have a prayer--and that's about it.

RB: (And as an aside, does having him spew the word "retard" every other sentence blunt the impact of his ostensibly noble speech?)

EL: I don't know about "noble" --it really just shows he's not brainless and that he doesn't want his house destroyed--but it's not as though he suddenly became a good guy. He's still a jerk.

RB: That said, between he and OverLord, there's a lot of that going around--sleazy, crazy or dangerous people who ultimately come off seeming pretty reasonable. Was that a conscious parallel, with OverLord returning this issue?

EL: Absolutely. I think there are a lot of shades of gray in most people.

GH: Angel's weight loss from issue 174 is still there. I was taken aback by this as I'm used to seeing Dragon returning to normal between issues. Angel obviously doesn't have a healing factor so it's different to see others deal with problems like this.

EL: Yeah, inevitably, she will recover and the nature of the book is that months will tick by, often between issues. But I did want to at least make passing reference to what came previously.

GH: It seems that Angel and Frank are all grown up! This is a huge development as we've seen these guys since infancy. Was it a subject you had reservations about? Did it take a lot of thought on how to portray everything in a satisfactory manner?

EL: It did take some thought. I didn’t feel it was appropriate to actually show these two going at it. I wanted readers to know it happened but showing it crossed the line--they are underage, after all.

RB: Over time--and even in this issue--Malcolm has combated the idea that there's anything sexual going on between he and Angel on the grounds that they're siblings-even-if-they-aren't. That same description could easily be applied to her relationship with Frank, so is that another wrinkle--besides just them being underage--that you had to consider while writing this issue?

EL: Sure. This is often the case when there are changes of this nature forced on people. I can remember friends whose parents got remarried suddenly finding themselves with new siblings and it can be really confusing. Is this new person thrust into your life really a relative--or can they be treated as just another person? A friend found himself with a new "sister" when he was in high school that he thought was hot. It turned out that she wasn't as infatuated with him as he was with her but what if she had been? Should their parents' relationship play a role? So, Angel finds herself living with the Darlings but she doesn't think of them as family necessarily. She lives with Malcolm and kind of does even though, for all practical purposes the relationship is largely the same.

GH: And finally for the main story, Dragon makes an intergalactic phone call! Looks like we could get an interesting conversation next issue!

EL: We will but I skip over much of what we know. Realistically a conversation like that would be filling in the other party what they missed but we SAW that--there’s no reason for us to have to listen to them summarize recent events. Really the point here was to get that reveal--for Malcolm to find out that his dad was alive.

RB: This may be a stupid or obvious question that you've dealt with on a forum--but for those of us keeping score at home, is the Vanguard "War of the Worlds" subplot going to cross directly into Dragon's space subplot?

EL: Yeah. The idea here is that the backup feature and lead will take place parallel with each other and there will be some crossover, like in this issue--we end with Malcolm getting a call from his dad and the backup story shows Dragon calling and asking Vanguard to patch him through. After having fans comment about backup stories not mattering--it's fun to do one when they feed off of each other.

GH: With the Vanguard backup, the upcoming war is nearly here. Is it exciting getting to a plot point you came up with nearly 30 years ago in Megaton Comics? This has to be one of the oldest dangling plot points in comics. Pretty damn cool!

EL: The thing was--that was Vanguard’s whole gig. The whole idea was that he was stationed here--so far from the action that the war would NEVER get here. Having the war arrive was really for the fans. It’s something the fans wanted to see paid off. It’s not something we really thought we’d ever get to.

And that is really much of the book. When I started up in 1992 I knew I wanted to do the book forever but I never seriously thought it would happen. There are all kinds of things--including Dragon visiting his people and finding out where he came from--that I never expected to get to.