With his identity revealed to the world and having undergone some terrible things at the hands of the villains of the DC Universe as a result, is it possible that Dick Grayson will have to take on a whole new look and identity in order to stay safe?

That doesn't seem so unlikely after DC Comics today released a teaser image for the forthcoming weekly series Batman: Eternal that depicts the whole Bat-family...along with a blond man in place of Nightwing.

Of course if it is then Talon is absent from the image. And if that's Talon, then Nightwing is missing. Hmm. 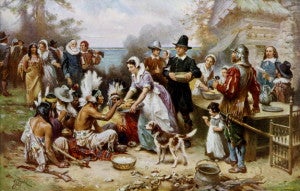 We also get our first look at (what we're assuming is) (the back of) Stephanie Brown in the New 52, hanging out with Tim Drake and Harper Rowe. Other guests at Thanksgiving dinner include Batwoman and her fiancee Maggie Sawyer; Joker's Daughter, Professor Pyg, Penguin, Red Hood, Tiger Shark, Batgirl, Batwing, Catwoman, Commissioner Gordon, and Titus the Bat-Hound (with a robin perched on his back--because we're still memorializing Damian that way? Or because there may be another Robin on the way?). We also see people who are probably Carmine and Mario Falcone, and a red-headed woman who's likely either Carrie Kelley or Vicki Vale. That she's hanging out with Tam Fox suggests Vicki.

There's also a boat in the distance covered in ice, ivy and roses growing around in obvious places. Poison Ivy, Mr. Freeze and Rose and Thorn? Or is the Rose representative of an absent Talon if the blond man is Dick Grayson.

Of course, if that's true and the rose is a placeholder for Calvin Rose...what does that mean when you compare it to Damian's robin...? As D20Gamer notes below in the comments, "There's also an owl in the tree representative of the Court of Owls, which could be tied to Talon as well."