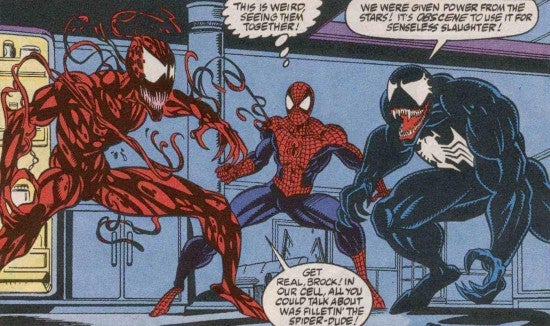 According to a sneak peek at Yahoo! Movies, the Daily Bugle Tumblr will release a story soon that will reference both Eddie "Venom" Brock and Cletus "Carnage" Kasady.

You can check out the full text below. The Amazing Spider-Man 2 is due in theaters the first week in May and will be opening in Europe between now and then, so sooner than later we should start to hear buzz about which of the many Daily Bugle reports are bearing fruit onscreen.

The greater New York tri-state area got a whole lot safer yesterday. Captured late last night, Cletus Kasady, escaped serial killer and notorious redhead, was eerily calm and subdued when he eagerly surrendered to the FBI. The manhunt for the FBI’s Most Wanted felon ended innocuously in a small strip mall outside of New Rochelle, New York.

A barista at a local coffee shop recognized Kasady and eventually called the police. The barista apologized to reporters later admitting she didn’t immediately alert authorities hoping Spider-Man would beat them to the scene. “What can I say? I am a HUGE fan.”

Kasady had been sentenced to twelve life sentences for the twelve murders he committed — but escaped while being transported between federal prisons. Sources say Kasady has been remanded to Ravencroft Institute for further interrogation until he is relocated to a maximum security federal prison. While the barista didn’t get her wish, we know Spider-Man thanks her… as we all do. For now it appears that Kasady won’t be causing any more carnage.

In the comics, Brock was ultimately disgraced when one of his big scoops turned out to be wrong -- proven wrong by Spider-Man, in fact. The alien symbiote that gives him his look and powers, rejected by Peter Parker, bonded with Brock and the pair became Venom, swearing revenge on Spider-Man.

When Carnage was first introduced, Venom had been in seclusion on a desert island, mistakenly believing that he had killed Spider-Man, and living out his (their?) days in bliss. Spider-Man came and recruited him to put a stop to Kasady, who had been possessed by a second symbiote: Venom's spawn, left behind when the costume broke Brock out of prison.