The adventures of Finn and Jake continue in BOOM! Studios' Adventure Time Season 11 #3, and we've got an exclusive preview of the new issue.

Adventure Time Season 11 comes from the writing duo of Sonny Liew (The Art of Charlie Hock Chye) and Ted Anderson (My Little Pony) and artist Marina Julia (Lumberjanes: Faire and Square), with covers by Jorge Corona (Big Trouble In Little China), Simone D'Armini, and Julie Benbassat. As you can see in this new preview, the team will be getting up to as mischief in the comics as you're used to from the show.

In Adventure Time Season 11 #3, the duo of Jake and Finn continue their attempts to save future Marceline, and on the way, they're going to have to make it through some tall odds. Luckily for Finn, he's got a shapeshifter on his side, and an uncountable tunnel journey later and the door is unlocked. Always good to have someone who can do that by your side.

You can check out the official description for Adventure Time: Season 11 #3 below, and the full preview can be found in the gallery.

"The story of the Land of Ooo continues on exclusively in comic book form from the writing duo of Eisner Award-winner Sonny Liew (The Art of Charlie Hock Chye) and Ted Anderson (My Little Pony), along with artist Marina Julia (Lumberjanes: Faire and Square). Jake and Finn continue their quest to save future Marceline from the ravages of time but find out that the really super creepy Three are up to no good! What else will turn up in this mysterious future version of Ooo?"

For Liew shows like Adventure Time don't come around that often, and he's beyond excited to be able to continue the series in the comics. 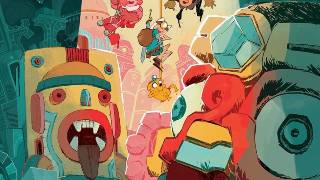 "I hadn't watched many animated series since the heyday of The Simpsons, but once I sat down and watched Adventure Time, I was immediately hooked," said Sonny Liew. "It gave me a sense of afternoons spent watching cartoons as a kid, somehow appealing to both the adult and kid inside you. I didn't try to analyze the form or structure too much, wanting to just enjoy the series on its own... but I suppose now I'm working on scripts for the comics, I'll have to watch it again with a different lens, and try to figure out the methods behind the magic."

Preview: Finn and Jake Come To The Rescue in 'Adventure Time Season 11' #3