Thrice-Nine used to be a very different place, but war has left it a shell of its former self. Now it's taken something that Sasha holds dear, and he'll do anything to get it back in AfterShock's Dead Kings.

Dead Kings is a new series from AfterShock Comics from writer Steve Orlando and artist Matthew Dow Smith., and we've got an exclusive preview of the first issue. The new series takes place in the world of Thrice-Nine, a place forever changed by a Techno-Magic war that occurred 30 years ago.

As you can see in the preview, the world these days can be a bit rough for those simply trying to survive it, let alone those who are on the hunt for something. That brings us to Sasha Vasnetsov, who is searching for the whereabouts of his brother, who was taken by the secret police. His quest won't be easy if the first few pages are any indication, but at least he's helped feed someone along the way.

He's going to need some help as well, and it appears Stone Mary could be the one to do so...if he can get to her.

You can check out the full preview in the gallery and the official description below.

Plagued by the ramifications of a techno-magic war now thirty years gone, Thrice-Nine is a dirty folklore world that limps along, degenerating into a place filled with paranoia and poison. Sasha Vasnetsov thought he'd escaped all that, but when news comes that his younger brother has been kidnapped by the secret police, he finds himself dragged back into the madness with a simple goal—to find his brother. 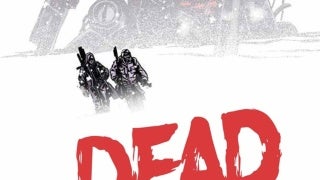 But Sasha is going to need help to do this, and he enlists Maria Kamenaya, a former warrior with hundreds of enemy kills to her name, who was betrayed by the very country she served. This quest is how they get both of those things back, in the lawless land of decapitated states...the land of DEAD KINGS.

Preview: Welcome To The World Of 'Dead Kings'