AfterShock's Backways is a breath of fresh air, and ComicBook.com had the chance to speak to the writer behind it Justin Jordan.

Backways comes from writer Justin Jordan and artist Eleonora Carlini, and is a sprawling tale of the supernatural world right underneath our noses. ComicBook.com had the chance to talk to Jordan about the new series, including how it all started.

"Backways is a fairly recent idea," Jordan said. "The really base idea was me looking at the idea of non-geographic nations; we tend to think of a nation as a piece geography, but it's people. So what if a bunch of people spread out geographically had common laws and culture? Which, naturally, mutated in my mind into a place that was geographically different locations fused into one. And that became the Backways, after a substantial dose of Guillermo del Toro and things like Return to Oz and Labyrinth."

One of Backways' biggest strengths is its collection of odd characters, characters that you feel connected to after a few panels. That goes for Anna, Sylvia, and especially Coyote, who will most likely be in the running for cosplay favorite of 2018 after the series hits stores.

"I think the keys to establishing character quickly are having the right visuals for them, and making sure that you have a really good grasp of what their character is," Jordan said. "Because, for instance, if you swapped out Coyote or Anna for Sylvia in that scene, the scene would play out entirely differently. Coyote and Anna wouldn't react like Sylvia, or each other. So I always try to have that in mind when writing, and it hopefully gives that quick sketch of who they are."

Anna, for instance, sticks out because of how unaffected she is by the fantastical. "I love Anna and Coyote the most," Jordan said. "Coyote Bones, by her own design, is an outrageous character, and that Anna completely does not care and is not distracted by her makes me smile every time they interact." 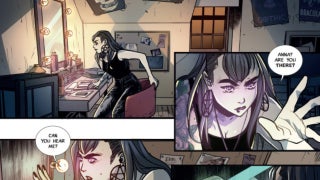 Part of Backways' charm is the gorgeous artwork from Eleonora Carlini, which fits the zany characters like a glove.

"I'd actually talked to Eleonora about another project, and when AfterShock became interested in Backways, I suggested her," Jordan said. "Which was totally a great move, because she is awesome on this. She's really, really elevated the book and she continues to blow my mind. I think my favorite thing so far is the design for Fell, in the second issue. In the script he's described as an immensely fat man. What Eleonora drew was that but... very different than what you're probably picturing."

As mad as that sounds, Anna will probably just shrug it off and continue to move forward, and that presents a worthy challenge for Jordan.

"Anna has pretty much stayed the same," Jordan said. "She's kind of a difficult character to write, in a good way. She's intensely focused and not necessarily immediately likable, which is tricky to pull off in a main character. I think (and you know, hope) the readers are engaged with her story even if she's not the most cheerful person in the world. Or in this case, worlds. But her obsessive focus on her goals is both her biggest strength, which is what allows her to find the Backways to begin with, but it's also her biggest challenge. That's a personality trait she can needs to control before it controls her."

While Anna is not immediately likable, Coyote Bones very much is, including her constant dependence on knockoff magical items. Evidently, it comes down to her day job. "It is not a paying gig, which is indeed why Coyote Bones' totems tend to suck," Jordan said.

As for things to come, Jordan teased a new character that will challenge Coyote Bones' fan-favorite status. "I suspect very strongly people are going to be all about The Morning Wolf," Jordan teased.

Exclusive Interview: Justin Jordan Welcomes You to the World of 'Backways'

Fall Guys Being Removed From Steam