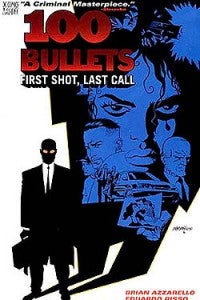 Looks like another comic book series might be making the leap to the small screen. Media sources report that writer David S. Goyer has been tapped to adapt the DC Vertigo series 100 Bullets, completely written by Brian Azzarello and illustrated by Eduardo Risso for its 100 issue runm for Showtime. The series itself was a gritty, non-superhero comic book series that focused on the acts of the curious Agent Graves, who tasked himself with going around and providing untraceable ammunition to people whose lives had been ruined or wronged by others, allowing them to draw their own moral conclusions as to whether or not they would seek revenge on those who cursed them. Fans of the series, which ran from 1999-2009, shouldn't fear Goyer's involvement. He is credited with co-writing both Batman Begins and The Dark Knight, both of which were well-received by comic readers and critics. He also helped to write the recent television series Flash Forward. If you're a fan of the series, what do you think about this? Good step? Right idea? Good network? Let us hear from you!

100 Bullets TV Series in the Works?

Batman #125 Review: Everything Batman Fans Could Hope For