DC has provided ComicBook.com with an exclusive preview of Justice League #35, the second issue from acclaimed writer Christopher Priest.

The issue, which features art by Pete Woods, will be in stores next Wednesday.

“In my initial Deathstroke conversation with Geoff [Johns], I suggested that, since we were reimagining Slade Wilson's adventures, why not shape the new book more like what a Deathstroke feature or TV series might look like?” Priest said when he took the Justice League job. “It is my intent to bring that same sensibility to Justice League, taking a hard 'what if these characters actually existed in the real world?' look and working in an area of the series premise that is less frequently tapped.”

“I am really excited and very intimidated by the opportunity to step onto DC's largest stage—the Festival of Big Gun Characters Priest Has Never Before Been Invited To Write,” Priest said. “It is my goal to mine a bit of new ore from this 50+ year old franchise by taking the tack Geoff Johns and I developed for Deathstroke: a ‘real world’ approach and exploring the characters’ humanity introspectively.” 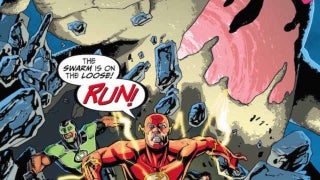 You can check out the official solicitation text below, and the preview pages in the attached image gallery.0comments

You can call your local comic shop to order a physical copy, or pre-order a digital version now.

“LOST” part two! Still greatly affected by the shocking events of the previous issue, the Justice League attempts to regain its balance when an alien infestation threatens the Earth. But nothing can prepare them for an attack closer to home…one that will reveal devastating truths about the League itself!