Nothing says "happy holidays" quite like the mentally ill assaulting people with hammers, so DC has provided ComicBook.com with an exclusive preview of this week's seasonally-appropriate issue of Harley Quinn.

These pages come from Harley Quinn #55, out this week from writer Sam Humphries with art by John Timms. That is not to be confused with the (also entertaining) Harley Quinn story in DC's recent Walmart-exclusive holiday one-shot. That story, "Killin' Time," was a reprinted tale written by Jimmy Palmiotti and Amanda Conner, with art by The New Frontier's Darwyn Cooke.

Harley Quinn #55 starts out with a holiday declaration -- Harley fairly screams at the reader that it's Christmas. So while plenty of comics around this time of year often feature wintry or holiday covers but have little content inside that is specific to the season, Harley Quinn will apparently not be one of them. 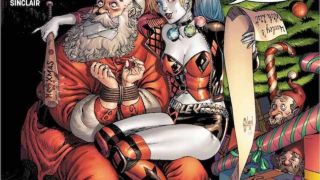 We do get to see in the preview some of the family squabbles you might expect from a group of deeply deranged people, one of whom is a supervillain and another of whom is playing death metal at the family Christmas. So...it's a Harley Quinn Christmas book.

Even the cover by Guillem March -- which features Santa Claus bound, his mouth strapped shut with duct tape (and DARN, that's gonna hurt pulling it off the beard), while Harley reads him her extensive Christmas list -- has a some fun to it. Bits and pieces of the list are visible to the readers, including her "good old jester costume." That costume is visible on the other cover, by Frank Cho, which features Harley building a snowman that is wearing her cap.

You can check out the preview pages in the attached gallery, and the official solicitation text for the issue below.

It’s a Harley ho-ho-holiday special! Nothing’s worse than spending the holidays with your uninvited, unannounced family—just ask Harley. Her brothers won’t stop fighting, her dad wants peace and quiet, and her mom just wants everyone to get along. But the dysfunctional family dynamic masks a major secret that the whole Quinn family is keeping from Harley. Will the big reveal mean an even bigger family blowout, or can Harley’s clan end their squabbling and remember the true meaning of the season?

Harley Quinn #55 will be available in stores and online on Wednesday.