DC has provided ComicBook.com with an exclusive preview of The Brave and the Bold: Batman and Wonder Woman #1 from writer/artist Liam Sharp.

The series represents the only combination of DC's "trinity" of heroes who have not yet had a stand-alone monthly title, with two different Superman/Batman titles and a Superman/Wonder Woman ongoing making their way to stores since the turn of the century.

"Diana is brought in to Tir Na Nóg because Cernunnos – who has become a sort of grand care-taker of the realm – is finding it impossible to keep the peace any more," Sharp recetly told Comicon.com. "There's unrest, so he casts the runes, confers with Danu and the Morrigan, and everything points to Diana. Unfortunately, in the time it takes for Cernunnos to go get her, a great King of the Fomorians is slain, so it looks like all-out war will start. Diana requests to bring in a friend – a Knight – who's a world-renowned detective, to help her solve the murder. She's an ambassador, a warrior, a peacemaker, but she's no investigator. So they team to to serve the purpose of maintaining the peace and solving a crime." 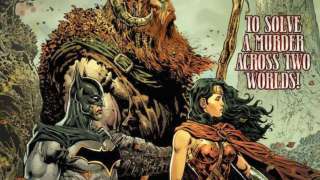 THE BRAVE AND THE BOLD: BATMAN AND WONDER WOMAN #1 Gallery

The new series was announced in November. Sharpe previously worked with writer Greg Rucka on Wonder Woman, and he said this team-up series would continue where that run left off.

In spite of a sizable chunk of the audience who would like to see a Batman/Wonder Woman romance explored (something popularized by the pair's chemistry in the Justice League animated series and toyed with briefly in Zack Snyder's Justice League film), Sharp has assured fans that Diana's relationship with Steve Trevor and Batman's impending marriage to Catwoman are both safe.

You can see the pages in the attached image gallery and the official solicitation text below.

Don't miss the start of a new, six-issue miniseries written and illustrated by Liam Sharp (WONDER WOMAN)! When a Celtic god's murder leads to a war between the fairy folk and a possible breach between worlds, Wonder Woman must find the murderer and keep the peace while Batman investigates strange occurrences in Gotham City. As Diana must turn to the World's Greatest Detective for help, the two heroes quickly learn their cases may be connected.

You can call your local comic shop to try and get a copy reserved, or pre-order a digtial copy of The Brave and the Bold: Batman and Wonder Woman #1 here.

Exclusive DC Comics Preview: 'The Brave and the Bold: Batman and Wonder Woman' #1