DC has provided ComicBook.com with an exclusive preview of Doom Patrol #10, out next week from writer Gerard Way and artist Nick Derington (with inks by Tom Fowler and colors by Tamra Bonvillain).

Way, whose Eisner-winning The Umbrella Academy is headed to the small screen, is the "showrunner" of DC's Young Animal imprint, of which Doom Patrol is the flagship title.

"It was about DC properties, which is why when I brought the idea in to Dan [DiDio] originally, I said I thought it should be separate from Vertigo because Vertigo is doing really great creator-owned stuff, and it had been a long time since they were allowed any DC characters," Way told ComicBook.com. "Instead of doing like a do-over with DC characters in Vertigo, I said, 'Let's just start something new.' That's the focus. Even a character like Mother Panic, though, it was created by me and Tommy Lee Edwards. We don't own that character, and I knew that going into it but it was the trade-off to make the art for me. It's not really a creator-owned place." 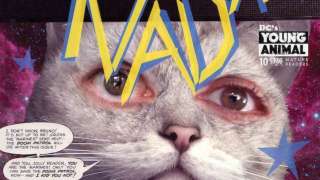 Way, known for his band My Chemical Romance, also co-writes Cave Carson Has a Cybernetic Eye along with his longtime friend Jon Rivera.

Doom Patrol is currently setting up for the events of Milk Wars, which will see the Young Animal label cross over with the DC Universe. In the story, a reality-altering corporation will introduce "wholesome," '50s-inspired alternate versions of DC's Trinity, repackaged for "new markets" as Milkman Man, Father Bruce and Wonder Wife.

You can check out the preview pages from Doom Patrol #10 in the attached image gallery and the solicitation text below.

The world is going haywire, and it's up to the Doom Patrol to save it from going to S#!%. Weird things continue to happen that only the Chief can (attempt to) explain. Plus, tap dancing, and secret origins revealed!

Doom Patrol #10 is in stores on Wednesday, January 24. You can arrange for a copy at your local comic shop or pre-order a digital copy online today.

Shazam! Fury of the Gods Director Says Movie Will Feature DC Intro After He Forgot To Include It in the First Shazam