DC has provided ComicBook.com with an exclusive preview of Superman #38, due out next week from writers Peter J. Tomasi and Patrick Gleason, and featuring art by Ed Benes, Sergio Fernandez Davila, Vicente Cifuentes, and Gabe Eltaeb.

The issue is the final part of the "Super-Sons of Tomorrow" storyline, which pits the Titans of Tomorrow against their younger counterparts in the Teen Titans with the life of Superboy Jonathan Kent hanging in the balance.

This is the first time fans have seen the Titans of Tomorrow -- featuring Superman Conner Kent, Wonder Woman Cassie Sandsmark and Flash Bart Allen -- since before Flashpoint rebooted the DC Universe in 2011.

"Super Sons of Tomorrow" picks up plot threads from Detective Comics and introduces the Batman of Tomorrow to the Super Sons, Damian Wayne (Robin) and Jonathan Kent (Superboy). The dark, adult version of Tim Drake has plans to do away with the Boy of Steel, claiming that his continued existence jeopardizes the future. 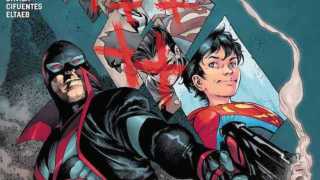 Can he be trusted, though, especially since we know this version of the character was profoundly affected by a different Superboy, Conner Kent?

The former Superboy's erasure from continuity following the events of 2011's The New 52 reboot will be addressed in-story within in the pages of Detective Comics, according to series writer James Tynion IV.

"Part of this story, where we started, was recognizing Tim Drake's classic origin and realigning Tim to the original iteration of the character," Tynion told ComicBook.com. "In resetting him back to his core, there's one part of the core of the character that was not being addressed -- that's still missing. I knew that it would be false to bring back to core of the character and not point to the part of the core that's missing. Using that as the piece that allows the future Tim Drake -- the 'Titans Tomorrow' Tim Drake -- to realize that this world has changed which means the future is no longer set and time can be changed, that's what really propels us into the future. It leaves this powerful mystery dangling that Tim doesn't know the answer to, but he knows it's important. To see that one play out, you guys are going to have to read the comic books."

The issue comes with a variant cover by Jorge Jimenez that pays macabre homage to The Adventures of Superman #498, the first issue of the "Funeral For a Friend" storyline, which featured Superman's battered corpse on the cover, laying on cracked pavement following his battle with Doomsday.

You can see the preview pages in the attached image gallery, and the official solicitation text below.

With no other choice left, the Batman of Tomorrow brings in the Titans of Tomorrow to take on today's Teen Titans—as the life of Superman's son hangs in the balance! See the return of future Superman Conner Kent, Wonder Woman Cassie Sandsmark and Bart Allen Flash in the final battle of this epic crossover.