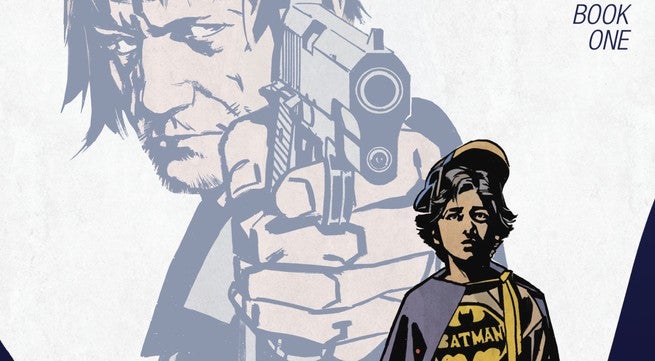 “What if Batman were real?” It’s a premise that has ostensibly been explored many times, and that’s not even considering the tangential questions of, “What if vigilantes were real?” or “What if superheroes were real?” Batman is a cultural icon as large as almost any in the Western hemisphere, and his shadow looms over the minds of children and adults alike. Even outside of comics readers and superhero fans, you can’t escape fantasies of making the caped crusader real. Yet what does that question really mean and what does that reveal about us? That’s the real question at the heart of Batman: Creature of the Night, and its first issue goes a long way in addressing it.

In this approximation of the real world, the protagonist is Bruce Wainwright, a child who loses both of his parents in a robbery. He has his “Alfred” in the form of a caring, but physically distant uncle, and his “Gordon” in the form of a well-intentioned police officer. Yet the focus remains on the reality of the situation in which a child is left with ample resources (albeit not those of a billionaire) but without parents. Even with the fantastic flourishes added by the end of the comic, this story reads more like horror than a morality tale or superhero adventure. At its core it’s about a world in which children are orphaned and no one is capable of helping. That’s what Batman looks like in reality and it makes for a gripping premise here.

The brilliance of what Busiek and Leon do within Batman: Creature of the Night is not in the application of realism, but in the study of real topics. The inability to capture a killer in the superhero comic is a source of tragedy for a heroic origin story; here it is a failing of an overloaded criminal justice system. How does that change the people within it? The officer who wants to do the right thing, the victim who wants to see justice, the caring attendees who feel helpless in the face of overwhelming tragedy. The murder of two people is not made out to be a special event here. It’s something mundane that has real effects on characters while simultaneously reflecting broader issues. In this way the story is transformed into case study and avoid glorifying the concept of Batman or transforming tragedy into something beyond a reader’s experience. It is real in a way that matters.

Leon’s depiction of these events is the key lens that differentiates fiction from reality. He utilizes a variety of styles in order to hold up a mirror to the fiction of Batman and provide inflection on each scene. Ben-day dots and clean lines are used to craft dreams and comics, the fictions of this world, and to show what Batman is to those who engage with the themes of his stories. The world is crisper and everything more clearly contained. Yet most of the comic falls into Leon’s more recognizable work wherein readers can recognize brushstrokes and engage with the texture of how each character is drawn and shadows mapped to shape a panel. Leon is a present artist and his presence is purposeful. Batman: Creature of the Night does not want you to forget it is a comic. This is art engaging with art and readers alike, and its manipulation of those who engage with it is clear without being too obvious. There’s a joy to exploring Leon’s work and his ability to affect mood and emotion makes the experience effortless.

Batman: Creature of the Night #1 is premise and the story is obviously far from done, making it only possible to speculate on its thesis. Yet the fashion in which it works with both specific icons and the very nature of comics storytelling is exceedingly promising. Busiek and Leon are interested in Batman, but only so far as Batman can reveal something more significant about the culture that embraces him as a hero. It raises the topics of failing systems and powerless individuals in a period when these topics have never seemed more potent or painful, even if they aren’t what everyone wants in a Batman comic. Batman: Creature of the Night isn’t the superhero comic we want, but it’s the superhero comic we need.

Review: 'Batman: Creature of the Night' #1 Is the Batman Comic We Need Today

DC Reveals A New Future Version of The Joker