Today saw the release of Martian Manhunter #1, the latest year-long reinvention of a classic DC hero in the vein of Tom King and Mitch Gerads's Mister Miracle. The series, from writer Steve Orlando and artist Riley Rossmo, takes inspiration not just from DC lore, but from decades of science-fiction and speculative literature about Mars.

...And along the way, it fundamentally rewrites much of what fans know about J'Onn J'Onzz's early life. ComicBook.com said that the first issue "feels like it’s the start of something great" in our five-star review.

Orlando and Rossmo joined ComicBook.com to discuss the series. You can get the first issue now in comic shops and online.

What was the process you went through when you were rebuilding the look of Mars? It's very much in your voice.

Riley Rossmo: A lot of the shapes, I draw from marine plants and animals, so that was one end of the stuff I put in. Then, the other side of it was desert creatures and plants. So, I put them together and ground them up, and then that's how the flora and fauna of Mars came to be.

I feel like when you design stuff, for me anyways, oftentimes if you take some kind of element that's familiar to somebody and then you sort of mash it with something else, you can get a really unique design, but it keeps it accessible. It doesn't become too strange that you can't relate to it. So, I tried to apply that to Mars. 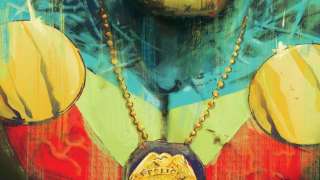 A Look Inside Martian Manhunter #1 Gallery

Which one of you guys was the one who came up with that idea of how to visually represent that these aren't necessarily real clothes?

Steve Orlando: The idea of having public and private shapes I think started with me, but how they would actually look and all that stuff...the benefit is working with Riley and knowing that he's gonna blow that stuff up. So, I think that came from you, man.

Rossmo: I think there's a couple times where J'Onn's in his human form and, in the script, it was that he puts on his clothes or changes clothes or puts on some, say, socks, and I started thinking about, "No, he just turns into socks. The skin just turns into a sock pattern and that's that."

While he doesn't necessarily call it that, J'Onn has always had public and private appearances here on Earth. Was what you did here just an extension of that?

Orlando: The social shapes and the true shapes, which is how they're actually named in the book, they are part of our sort of reinvention of Mars in the way of why would it be human? I was talking about this, I was thinking about this recently.

The challenge of doing things with Mars is like -- and we owe this in many ways to Chris Conroy, our editor, saying, "Go wild with these things," because the instinct, obviously, because we are human, Riley and myself, is to think that things have to happen a certain way -- but the goal and the challenge is to constantly call that into question. Why would all these Martians, if they could look like anything, all look vaguely humanoid, you know? We do a little bit in issue two where we do explain some of that in a way that I'm really pleased with. But in general, there was this realization. If your body could look like anything and you could fly, you don't even have to walk necessarily, why would you have legs and look kind of like a human, necessarily?

So, a lot of the design choices for Mars, including the true and social shapes, come from really taking a hard look at ourselves as a species and saying, "Are we doing this because it feels true to the characters or are we doing this because it's what we do as living beings?" If it was the second answer, we had to go back and look again. Once we decided that, it was about building a belief system around it. I think that the concept of nudity and vulnerability is universal. I only have to look at my dog being embarrassed when he's taking a s--t to know that the other animals can feel embarrassment. So, with that in mind, that is why even though they can look like anything, there is still a way for Martians in their true shapes to have a level of intimacy and vulnerability with their loved ones.

So, once we decided that they could look like anything and they had a ritual around designing their body, their entire body is a form of personal expression, then it was like, "Well, okay. How can we bring through the things that are universal and this feeling of sharing more of yourself with someone that we do as a species in a way that is unique to Martians?"

So, rather than just taking their clothes off like we do, they take their whole damn body off and reveal this sort of generic form underneath. And yet, through hundreds of thousands of miles and hundreds of thousands of years to get to Mars, those sorts of concepts of love and vulnerability and shame and pride are universal. So, those things had to come through.

Are there any kind of big differences that aren't immediately evident in terms of domestic life? Because one of the things that I think it grounds the book but it's also surprising is that in this first issue, we see a lot of kind of just everyday life for J'onn, pre-cataclysm. It's basically just hanging out at the dinner table.

Orlando: I want Riley to answer this, too, 'cause a lot of it comes from the design aspect and what he did. But I think the big difference is that, to be frank, our Mars is much more alien than Krypton where everybody basically looks like a human. Not to shade Krypton -- It blew up, it had a bad time -- but when you have a world like ours, where yes, people can fly and they walk through walls and all these things, it was important to us to still keep things relatable in some way.

So, if we couldn't have that in the actual top-line culture because it is so alien, a lot of their actions, you do need an emotional anchor. That's why it was important to me and important to Riley, I think, to show these moments at home and these moments that are universal and will show us how to care. 'Cause the whole point of spending extra time on Mars is so that we truly understand what J'Onn's lost and we truly feel more for him when he finally comes to Earth.
So, I think once we did our job as best we could of creating a world that was truly unlike Earth, we then paradoxically had to decide the ways in which we could show readers that, like, "Yeah, this guy's a shapeshifting alien cop with a secret, but he's kind of just like you."

Rossmo: Yeah, and the more time we spend with him, that's a part of it that's starting to hit me really hard, is that it's not just throw-away stuff. It's not a throw-away thing that, "Oh, he had this family and the cataclysm happened, he lost his family. Now he's on Earth doing this thing." The more time you spend with them, the more it's just more personal.

All that time on Mars together is personal and having stuff like having dinner together, it makes it intimate and makes it special, and also makes J'onn's struggles on all levels more important, more relatable. That stuff is making it really hard to draw sometimes, because you know it's happening. The more I draw the family, the more personal it becomes. The first page of the thing points to where it's going and we can't change that.

The Suicide Squad to Screen Early at Fantasia Fest