The CW has released new photos for "Reign", the upcoming midseason finale of Supergirl's third season.

After saving Earth-1 from the Nazi invaders of Earth-X -- and preventing the Nazis from stealing Kara/Supergirl's (Melissa Benoist) heart in order to save their own Kryptonian, Overgirl -- the Danvers sisters return to Earth-38 just in time to celebrate the holidays. However, it's not all a joyful party. The World Killer, Reign (Odette Annable) makes her presence known and if that wasn't trouble enough, Morgan Edge (guest star Adrian Pasdar) is back as well. You can check out the photos in the gallery. 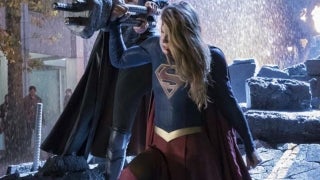 The photos give fans the best looks yet at Reign as well as just how powerful she really is. In some of the photos Supergirl can be seen battered and bloody, reinforcing that the World Killer is truly a much larger and different kind of threat than anything the Girl of Steel has ever faced before -- and that includes when she was fighting her mind-controlled cousin last season.

But it also looks like that before the fighting starts there are some merry and bright moments to enjoy. The photos show a festive holiday party that seems to hint that, despite Samantha being told that she would forget about her daughter, Ruby (Emma Tremblay), and a promo clip for the episode showing something definitely not right when Samantha returns home, the mother and daughter are attending the party together. Could this be buildup for what Annabel has previously said would be a "heartbreaking" story for Samantha as fans see her fully transition into becoming the World Killer, Reign?

And they aren't the only somewhat surprising pair. The images also show James (Mehcad Brooks) and Lena (Katie McGrath) enjoying a close moment, as James steps in to offer protection for Lena as tension build with Morgan Edge, perhaps causing a spark to ignite in the process. And speaking of sparks, audiences may get a little more information about Mon-El’s (Chris Wood) surprising marriage to Imra Ardeen (Amy Jackson) as both characters, while not appearing in these photos, were featured in the promo teasing that the rise of Reign could signal the end of days.

Black Lightning Recap: Everything You Missed in "The Book of Reconstruction: Chapter Three: A Light in the Darkness"